Over the past few years, the smartphone industry has evolved greatly. For smartphone display, Essential Phone brought the innovative tear-drop design sometime last year. Since then, we have seen iPhone X notch, vivo NEX pop-up camera design, Oppo Find X periscope structure and most recently, Xiaomi Mi MIX 3 slide-screen design. These designs all aim at the same thing – to increase the screen-to-body ratio of the phone. Definitely, the future of smartphone screen display technology will have a new look. 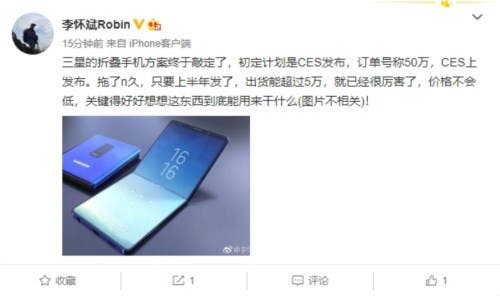 Samsung has been developing a foldable phone for some years now. We have seen numerous renders in time past but it appears its launch date is close. Gao Dongzhen, president of Samsung’s mobile communications division, earlier confirmed that Samsung’s foldable phone will come before others. From the speculations, we expect an official announcement at the San Francisco Developers Conference in November this year. Thus, the official release date is quite close. Recently, Li Huaibin, an analyst for IHS analysts, revealed that Samsung foldable phone will arrive at CES show early next year. According to him, the first shipments should be around 500,000 units. This is basically because the device will be freaking expensive.

Foldable phone technology is at infancy and Samsung has a firm grip on foldable flexible displays. This puts the company in a good position to release a decent foldable phone first. Samsung foldable phone will be equipped with a 4.6-inch external screen and a 7.3-inch foldable internal screen. After the body is unfolded, the rendering effect can be similar to that of a tablet PC.

Next Nubia Called on Everyone to Take off Their Smartphone Cases