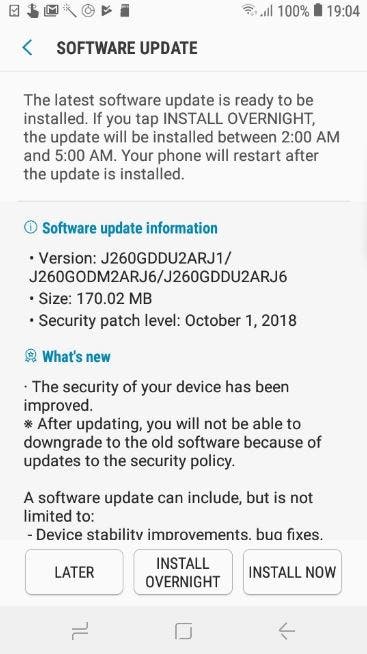 The update. currently seen on Indian units weighs 170MB which is fair enough for a security patch. If you own this smartphone, you can expect an OTA notification anytime soon. However, you can also head to System » Software update menu in the phone’s Settings app. The full firmware for the new software is designated J260GDDU2ARJ.

Samsung Galaxy J2 Core comes with Exynos 7570 Quad-core clocking 1.4 GHz. As an Android Go phone, it has only 1GB of RAM and 8GB of internal storage (expandable up to 256) which is “enough” for an Android Go phone. This smartphone uses a Corning Gorilla glass 5.0-inch display with a resolution of 540 x 960 pixels while its aspect ratio is 16:9. It runs on Android 8.1 Oreo (Go edition) and has a 2600 mAh battery to keep its lights on.

Previous Honor Magic 2 Invites Out, Will Launch on October 31st