Today, Huawei held a press conference in Shanghai and officially released the Huawei Mate 20 series smartphones for the Chinese market. Since the Mate 20 line models have been launched in London before, many are looking at DXoMark scores to know whether they provide better camera performance than the Huawei P20 Pro, which has been on the top of the lost for a while. At the press conference, Huawei said it would not announce the DXoMark scores of the Huawei Mate 20 series, because they are too high, and the company is afraid of hitting friends.

Sooner or later, DXoMark will evaluate the cameras of the Huawei Mate 20 series and put them in the list. But at this moment, the absolute leader is another Huawei phone, the P20 Pro with 109 total points. Apple’s latest flagship iPhone XS Max ranked second with 105 points. The Xiaomi Mi MIX 3 that was released yesterday ranked third with 103 points. 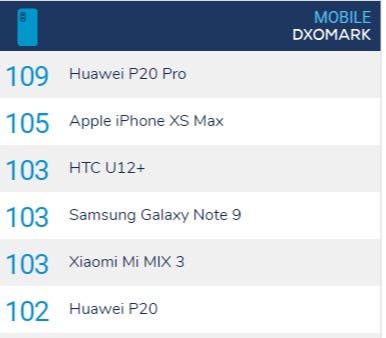 The Huawei Mate 20 line smartphones are top-end models with outstanding features. But in this topic, we are more interested in the camera hardware. Particularly, the Huawei Mate 20 Pro uses a 40 MP wide-angle sensor, with a f/1.8 aperture, a 20MP super wide angle sensor, with a f/2.2 aperture; and an 8MP telephoto sensor with a f/2.2 aperture. It supports 3 times optical zoom). Other features include a 2.5cm macro shooting and supports AI Cinema Mode, which adjusts the color, saturation, and brightness of the clip.