While the Pixel 3 and 3XL are yet to hit some markets, a strange and new mystery device from by the company has reportedly appeared on Geekbench revealing pretty small information about the device. Codenamed the “google rammus, the mystery device is seen running Android 7.1 Nougat and with 4GB of RAM, and is powered by an Intel Core M3-8100Y processor.

Now, the Android 7 and Intel Core M3-8100Y processor are quite old, fueling speculations that the unknown Google Rammus could be a much older prototype of the Pixel slate which never aw the day. There are chances too that the device could be a watered-down variant of the Pixel slate which could be unveiled soon, and if that pans out, it then means the Google Rammus will swap the 8GB RAM on the Intel Core M3-8100Y processor powered Pixel slate for a 4GB RAM. 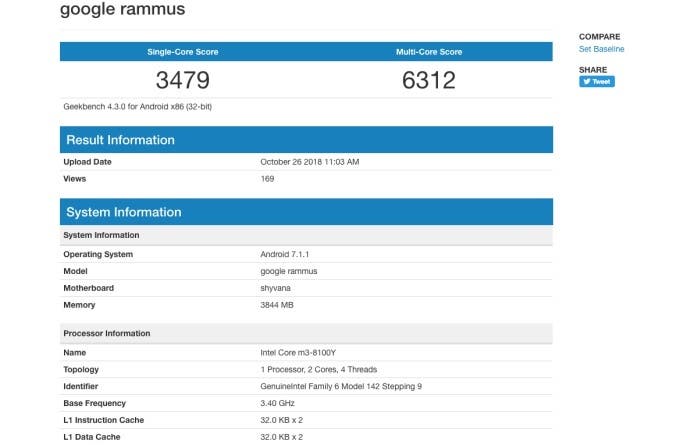 There is no info about the phone ’s real name, storage size, display, or camera at the moment,  but such details will probably surface in the days to coming days.

Next Xiaomi trolls OnePlus 6T with a calculator giveaway; puts Poco F1 price on the table