The Galaxy Note 9, and the Quad camera Galaxy A9 are only a couple of weeks old in the market, but it appears a new Samsung phone will in no time debut.

The Koren chaebol today has reportedly issued media invites to a product launch on November 11, 2018, in Wuxi, a Chinese city near Shanghai. And unlike most Samsung invites, this one leaves no room for guessing. The invite says the Samsung W2019 will be the star of the show.

The Samsung W series is unarguably the company’s oddest looking smartphone range, offering the dated clamshell designs, but with some hefty price tag. Murmurs about the Samsung W2019 has been around for a long time, and just a few hours ago, we got some leaked images of the purported  Samsung W2019.

although Samsung has yet to confirm some basic details about the device, we already have a good idea of what the device might look like, thanks to a couple of leaked images that emanated from Weibo yesterday. Chief amongst the features noticeable from the image includes a dedicated Bixby button under the volume rocker, a wide power button (perhaps there will be a fingerprint sensor, a USB-C connector), while the 3.5mm audio jack apparently is absent. 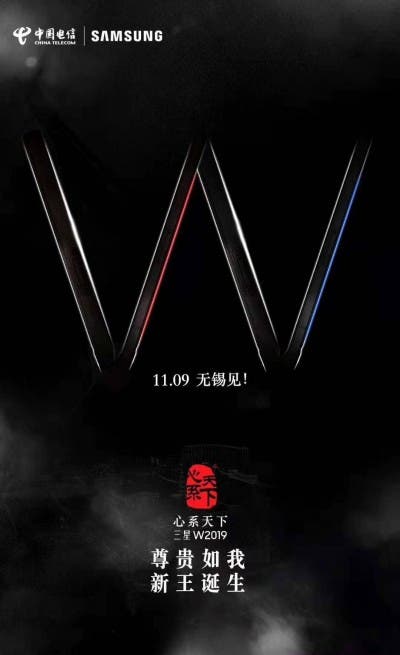 The phone like the previous generation of the W series phone is expected to be exclusive to China and is rumored to cost at least CNY17,000 or about $2,500/€2,100 due to its exclusivity. The release date has now been fixed for November 9, so we should get to hear more about the device when it becomes official.