The Huawei Mate 20 Pro, despite not yet widely available is already getting some sort of support in form of a software update from Huawei. Android Authority reports that a section of users in the UK and SouthAfrica are currently receiving a software upgrade on their newly acquired Mate 20 Pro.

The update which you are expected to receive OTA is sized at 491MB,  and bumps the  EMUI 9 to build number 9.0.0.126 and also bring along the October security patch, even though the recently announced OnePlus 6T is already running the November patch from Google.

Aside from that, the update also brings with it some new filters and effects to the Mate 20 Pro camera suite, AI color, background blur, and vintage filter options when using the phone’s video mode. The Mate 20 pro is also getting a new camera feature called AI zoom, and that basically means you can adjust the focus when shooting videos.

You soon will be prompted with the update if you already have the device in your possession, otherwise, you can check for the update via your mate 20 pro Settings and check for a software update now. 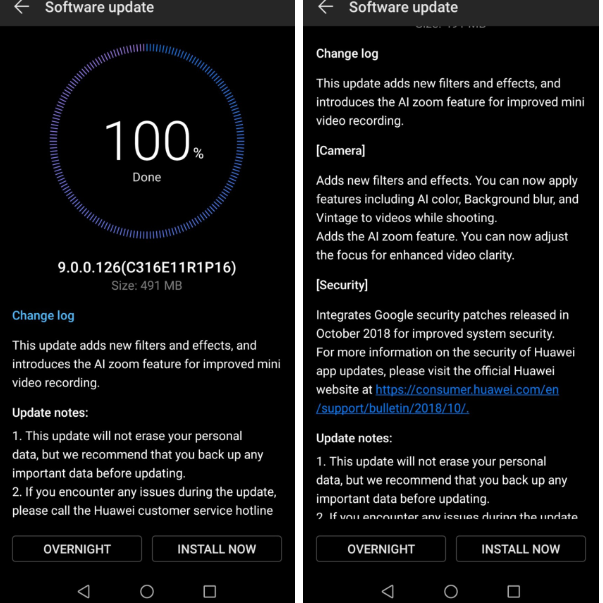 The Huawei Mate 20 is arguably one of the best camera packed phones around, and interestingly, it gets virtually all the trendy premium specs you can think of in a contemporary flagship smartphone, like an in-screen fingerprint reader and the ability to wirelessly charge other phones. The Mate 20 Pro doesn’t come cheap, but definitely, worth all the pennies, you would have to splash on it.

Next Global Smartphone Shipments in the Third Quarter of 2018