Last month in the mid-November, Motorola had introduced its Motorola One power which runs on vanilla Android 8.1 Oreo and recently Motorola announced that they plan to give a Pie update to the Android One device before the start of next year.

Evidently, on 2nd November, the Motorola’s One Power phone showed up on GeekBench’s Benchmark list and hinting that a stable OTA update could be close.

GeekBench (a cross-platform processor benchmark) listed the phone as surprisingly running a Snapdragon 660 processor even though it should be powered by a Snapdragon 636 processor. Speaking of its score, it is the same as that of other smartphones which run on Snapdragon 636. 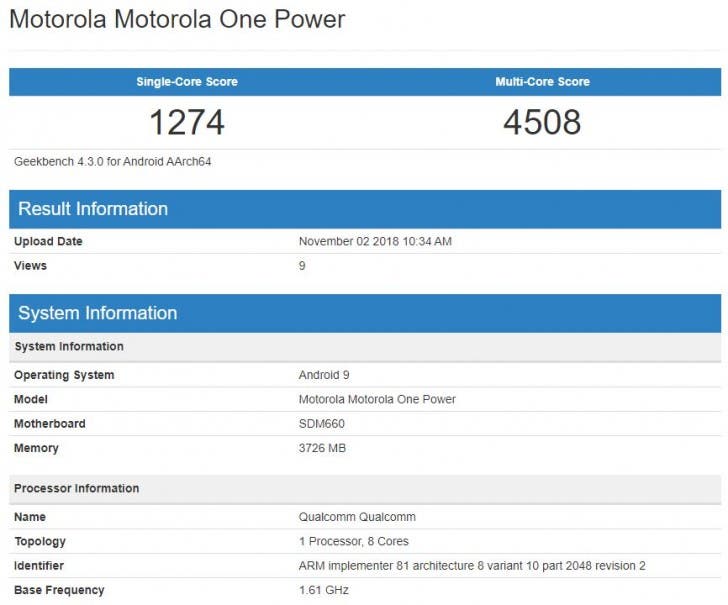 Furthermore, the new Android Pie update for the phone is expected to come before the next month. The new update is believed to come with an Android wellbeing app, a new navigation system, adaptive battery/ brightness, app actions and more on.

As a reminder, the One Power boasts a 6.2-inch display with HD+ resolution and an aspect ratio of 18.7:9. The phone is launched in two variants 3GB and 4GB and backed with 32GB and 64GB respectively. The new phone sports a dual rear camera of 16MP + 5MP at the back and at front it carries a 12MP selfie shooter. It has additional features like USB C-port and a rear-mounted fingerprint sensor. Lastly, the phone is fueled by a collusive 5,000 mAh battery.