A couple of months ago, Chinese manufacturing giant, Xiaomi, released the Xaomi Redmi Note 6 Pro is a very funny manner. This smartphone was already officially in the market for a few days before the manufacturer silently announced the device. Now, Indonesian Social Media Director has announced that the Redmi Note 6 Pro will be released in Indonesia tomorrow at a press briefing. 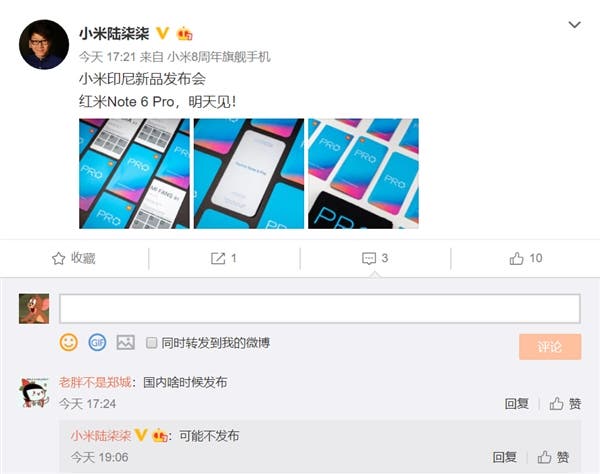 The Xiaomi Redmi Note 6 Pro is equipped with a 6.26-inch FHD+ display with an aspect ratio of 19:9 and its screen-to-body ratio hit 86%. The rear of this smartphone is just like the Redmi Note 5. It has three segments with the upper and lower sections molded from plastic while the middle section is forged from a metal material.

This smartphone is powered by a Qualcomm Snapdragon 636 processor coupled with 3GB/4GB of RAM and 32GB/64GB of internal storage. In the camera department, the Xiaomi Redmi Note 6 Pro boasts of a four-camera setup (dual on both sides). The rear has a 12MP+5MP (supports 1.4-micron large pixels and supports dual-pixel autofocus) with the LED flash stacked between the sensors while on the front, we have a 20MP+2MP configuration which suggests that this smartphone is designed for selfie lovers. The front AI dual camera supports AI beauty. It runs on Xiaomi’s MIUI system on top of Android 8.1 Oreo. Interestingly, this smartphone retains its 3.5 mm headphone jack.

Previous OnePlus 6T Gets Naked for JerryRigEverything, Here's the Result