Xiaomi has started rollout of Android 9.0 Pie to the Mi A2 after Motorola announced the same for the One Power today in India. The new update for Mi A2 users comes with the features that were recently introduced by Google on its latest vanilla version of Android. However, it seems like the update is popping up on a limited number of devices currently, so other Mi A2 owners may have to keep a little bit more patience.

The new update is considered to be of more than a 1GB in size and it brings some new cool features like navigation gestures, adaptive battery and brightness options, slices, app actions, accessibility menu and new screenshot shortcut. Besides that, the update comes along with the November security patch. 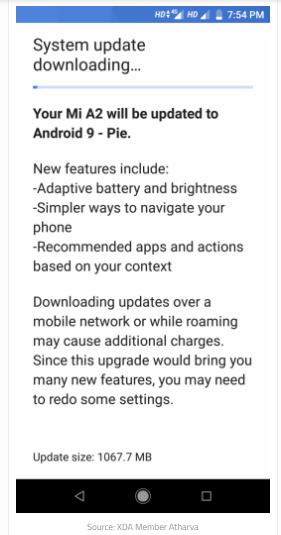 In the past, Xiaomi had a lot of trouble with bugs on their Android One devices like during Mi A1 the company had to stop the Android Oreo update twice and furthermore, many Mi A2 users complained about their phone’s poor battery performance and some issues with a fingerprint scanner. Let’s hope this time Xiaomi makes it right with a relatively bug-free build of Pie.

Next Get some car accessories cheaper with our Lightinthebox discount coupons