While the upcoming Realme U1 is set to launch next week, on November 28th, some people seem to have already gotten ahold of the handset somehow or at least it’d look so.

We indeed have some photos coming from the Smartprix site which portray the packaging the Realme U1 will come in. But this wouldn’t be enough to write a news about it though, so where’s the interesting stuff?

Well, if you check out the image below, you’ll find a comparison between the Xiaomi Redmi Note 6 Pro, the Honor 8X and the Realme U1. 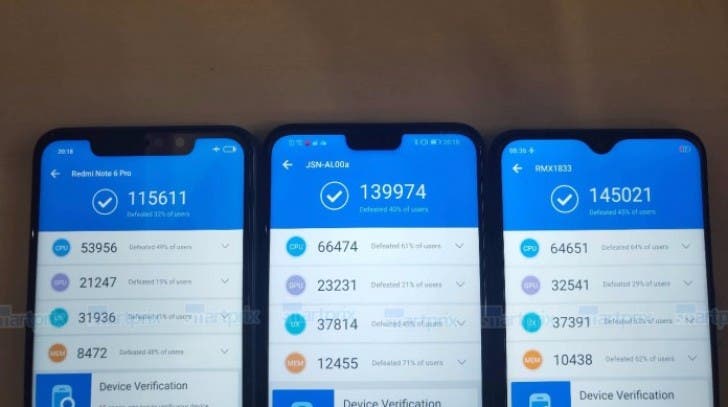 As you can see in the picture, the three handsets have been benchmarked on AnTuTu and the results are pretty promising for the upcoming MediaTek Helio P70 powered phone.

The Realme U1 did indeed score over 145k points, while the Redmi Note 6 Pro with its Snapdragon 636 scored 115k and the Kirin 710-equipped Honor 8X achieved almost 140k.

So, in theory, the MediaTek Helio P70 is set to bring some competition into the mid-range segment. Of course, we still have to find out more about power consumption before giving it a thumbs up, considering that it hasn’t always been a good aspect of MTK chips.

Nevertheless, we’re glad to see MediaTek back in the game with the Realme U1, hopefully accompanied by a very attractive pricing as well.