The Chinese manufacturer Huawei brings with the Huawei P Smart 2019 shortly before the end of the year once again a new mid-range smartphone on the market, which should appeal primarily to price-conscious customers. For the first time we have official press photos of the new model.

The Huawei P Smart 2019 is apparently closely related to the recently introduced in China Honor 10 Youth Edition or Honor 10 Lite. Apart from the changed color scheme, the devices seem to be largely identical at first sight, which was the case with the predecessor models Honor 9 Lite and Huawei P Smart.

Accordingly, the Huawei P Smart 2019, whose internal code name is “Potter”, has a 6.2-inch LCD screen, which offers 2340 x 1080 pixels, a slightly above full-HD level resolution. The panel is in 19.9:9 format and comes with a teardrop-shaped cutout for the front camera therefore. 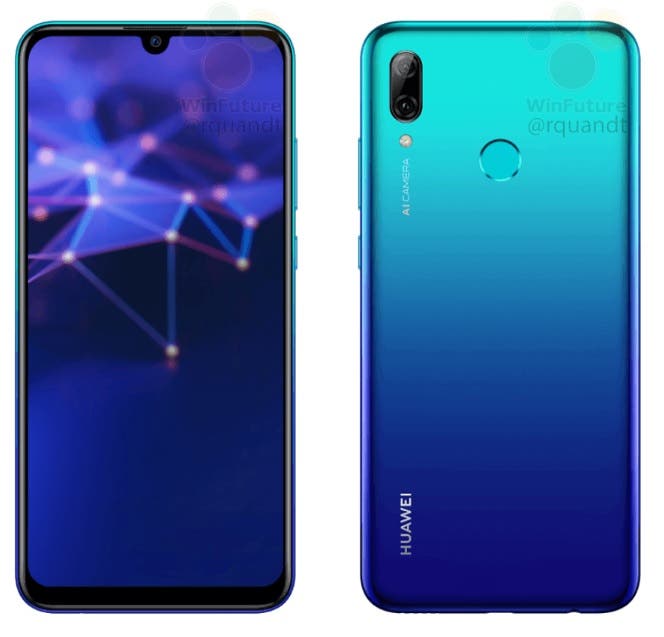 Huawei’s own Kirin 710 Octacore SoC is under the hood. It features four ARM Cortex-A53 cores with a maximum of 1.7 gigahertz and four high-end cores based on the Cortex-A73 architecture with up to 2.2 gigahertz. The memory is three or four gigabytes in size depending on the model, while the internal flash memory is 32 or 64 gigabytes.

The battery is a 3320mAh which is officially specified with 3400mAh. The power supply will probably also be done by means of a MicroUSB connection – which in 2018 hardly seems timely. And the phone is expected to run on EMUI 9 based on Android 9.0 Pie.

The Huawei P Smart 2019 will probably be officially launched in the next few weeks, the device comes in the colors “Midnight Black” and “Aurora Blue”, the latter variant offers a gradient from dark blue to a turquoise tone.

Note: For reasons of source protection, we have changed the screen content of the device to the photos shown here. However, these are official marketing pictures of the device, which have not undergone any further changes.