We just got wind of a report that says the device special edition OnePlus 6T will make its global debut on December 11th, before heading to India on December 12th, and then China on December 14th.

OnePlus has in the past done a few special edition releases and is again partnering with  UK carmaker McLaren Formula 1 to release a special edition OnePlus 6T dubbed McLaren Custom Edition 6T. OnePlus has released a couple of promotional materials about the device, emphasizing on the speed, with the claim that it has the “world’s fastest in-display fingerprint sensor on any smartphone.”

Up until now, we were made to believe that the McLaren Custom Edition 6T smartphone could arrive later on December 11th, but there is now a fresh report that says otherwise.

According to an official OnePlus source, the special edition OnePlus 6T will happen on the “OnePlus 5th Anniversary Special Event” holding at the Shenzhen G&G Creative Community at 14:00 on December 14th.

First announced back on October 29th, the OnePlus 6T is the Chinse firm first smartphone to be officially sold in the US. The device boasts of some internal makeups that could make it stand against some higher priced devices from industry top players. 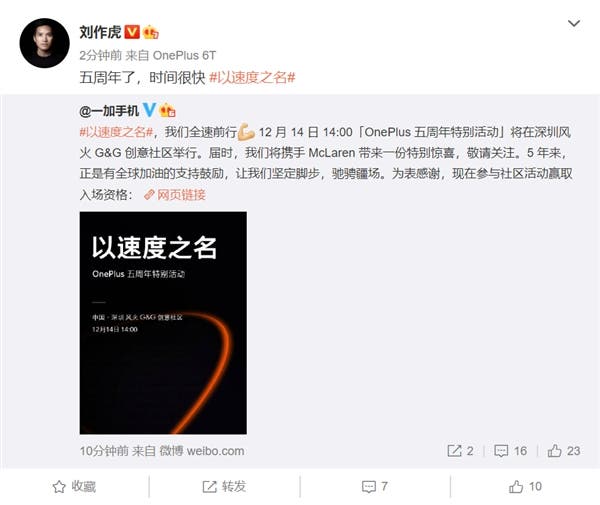 While previous special edition smartphones from the firm retained virtually all the hardware specs of the base variant, san some new color design, a few reports have it that the McLaren Custom Edition 6T will retain the 256GB in storage like other variants of the device, but will ditch the other RAM option for 10GB RAM, and that could explain why OnePlus in its promotion is placing so much emphasis on Speed.