In the Geekbench performance test database, appeared unannounced smartphone from Samsung with the model number SM-A505FN. It is expected to be the Galaxy A50, which will be the successor of the Galaxy A5 (2017).

The tested device model is equipped by the new Exynos 9610 processor and has 4 GB of RAM. In addition, the smartphone runs the Android 9 Pie.

The Exynos 9610 is manufactured on a 10nm FinFET process and is expected to power at least a few mid-range Galaxy martphones next year. A key feature of the chipset is its support for 480FPS slow-motion video capture at 1080p and 4K video encoding/decoding at 120FPS.

The phone has got quite good results in the performance test: 1615 points in single-core and 4380 points in multi-core. Although smartphones with Snapdragon 660 or Snapdragon 670 chips are gaining a bit more points. 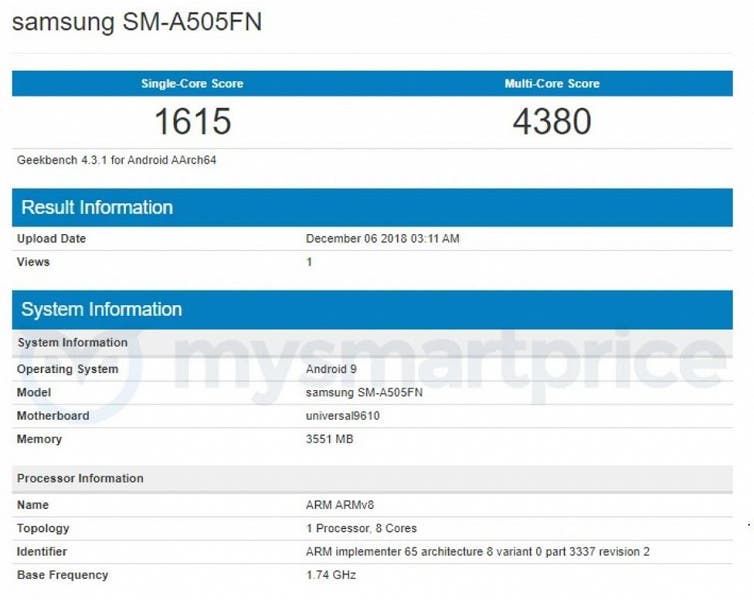 Unfortunately, there is no information about the announcement date of the Galaxy A50 smartphone yet.

Recall that Samsung is now preparing for the presentation of its first smartphone with a subscreen camera. Samsung has scheduled the launch of its Galaxy A8s heavily rumored to come with the Infinity O display for December 10th.

Other than the camera hole, the device is also expected to come with a triple rear camera alongside with the Snapdragon 710 and 6GB of RAM and it will run Android Pie out of the box.