As promised, MediaTek has today presented the Helio P90, its new mid-range SoC based on TSMC FinFET 12-nanometer production process. The chip has an octa-core CPU, built-in APU processor and better graphics performance with 50% increase compared to Helio P70.

Helio P90 is a SoC with octa-core CPU, consisting of two asymmetric core clusters: 2 Cortex-A75 2.2GHz cores and 6 Cortex-A55 2GHz cores. The GPU is no longer the Mali-G72 MP3, but a IMG PowerVR GM 9446 clocked at 970 MHz produced by Imagination Technologies, which promises a performance increase of 15%. 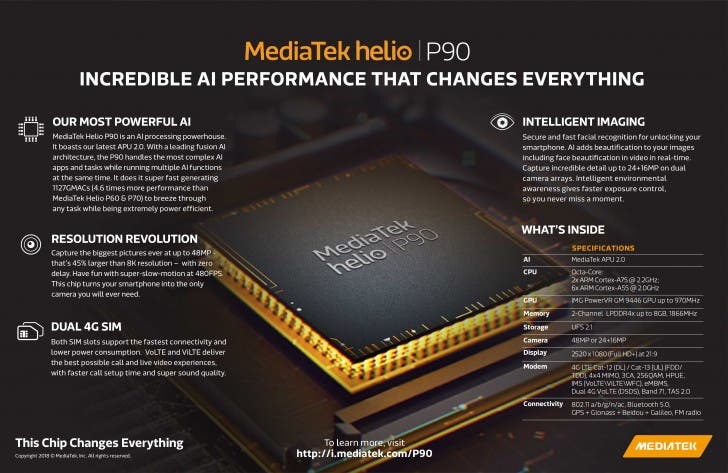 The real gem of P90, however, is hidden in the heart of the processor, in the neural processing unit that arrives at 2.0 version, more than quadrupling the performance compared to the APU present in Helio P70: the computing power reaches 1127 GMACs, for a performance jump of precisely 4.6 times.

The new APU will handle all operations much faster and more efficiently than version 1.0 and the first results of this new hardware implementation are already seen in image processing, as the new SoC supports sensors up to 48 MP (on Helio P70 were limited to 32) with null acquisition delay, double 24 + 16 MP cameras and slow motion up to 480 fps.

The AI ​​will analyze and track the movements of 5 people in real time at the same time framed with the camera, allowing you to use avatar in augmented reality, identify many types of scene, have an excellent support to Google ARCore and safely unlock the devices thanks to an accurate facial recognition.

The 5G is still absent, but it is certainly not a problem given the low cost target of this SoC; on the other hand, support for the Bluetooth 5.0 and the Galileo European satellite positioning system were added.

The first smartphones with MediaTek Helio P90 will be available from the first half of 2019 and will have at least in theory, really high-level performance at very low prices, a welcome combination in the world of consumer technologies.

Previous Micromax teases what might be its first notched smartphone