Lenovo is launching the Lenovo Z5s in a few hours from now, and the firm has been actively drumming up support for the sequel to the Lenovo Z5 Pro in form of official teasers. The device codenamed Lenovo L78071 which we saw earlier on China’s TENAA, has now cleared the Geekbench test revealing some of the information which we hitherto had no idea of.

The Geekbench listing suggest the Lenovo Z5s will boot Android 9.0 Pie out of the box, while it will be powered by a 1.71GHz processor suspected to be the SDM 710, and do note that the said SDM can attain a higher clock speed, so it quite plausible the listed clock speed isn’t of the performance cores. 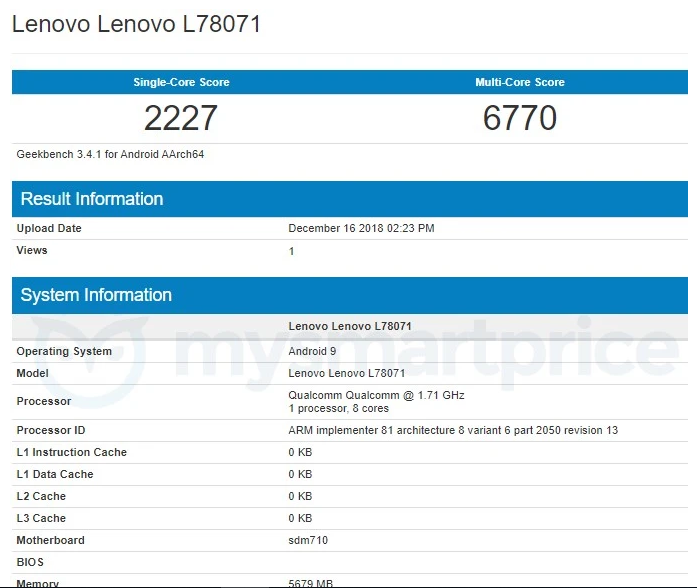 But while we suspect the processor to be the SDM710 chipset, we expect Lenovo to also announce a more premium Lenovo Z5S Ferrari SuperFast edition packing the Snapdragon 845 chipset, 12GB RAM, and 128 GB of internal storage as revealed by a leaked spec sheet earlier today.

The Lenovo Z5S returned a single-core score of 2227, and a multi-core score of 6770 both of which are line with devices that use the relatively new SDM 710.

So far, we know the Lenovo Z5s will feature a pinhole cut-out in the screen for the camera, a triple rear camera setup similar to the Huawei P20, and a fingerprint sensor.

The device will be announced on December 18 in China, and will be offered in three color variants including – Coral Orange, which is a gradient orange shade and Pantone’s color of the year for 2019; Quite Blue, which reflects the colors of a rainbow when rays of light hit it at certain angles; and Starry Night which is just classic black.