At Mobile World Congress (MWC) in Spain earlier this year, Asus had announced its Zenfone 5 range of Smartphone including the ZenFone 5, the ZenFone 5Z, and the ZenFone 5 Lite, while it omitted the Zenfone 5 Max. We were however still hopeful that the device will be presented during the year as it has secured Wifi certification and even appeared on the Geekbench database running Android 8 Oreo.

The device is still under the wrap even as we bid goodbye to the year. But it appears Taiwan-based ASUS still got plans to launch the device soon as it has again been spotted on the GeekBench database, and while it previously took the test running Android 8.0 Oreo, the recent Geekbench listing suggests the Asus Zenfone 5 Max will be running Android 9 Pie when it launches.

The Zenfone 5 Max will succeed last year’s huge battery-toting ZenFone 4 Max and arrive with Android 8.0 Oreo, and as revealed by the Geekbench listing, the device will come with 4GB RAM and an octa-core Qualcomm Snapdragon 660 processor under the hood, while there are chances of higher RAM variants. 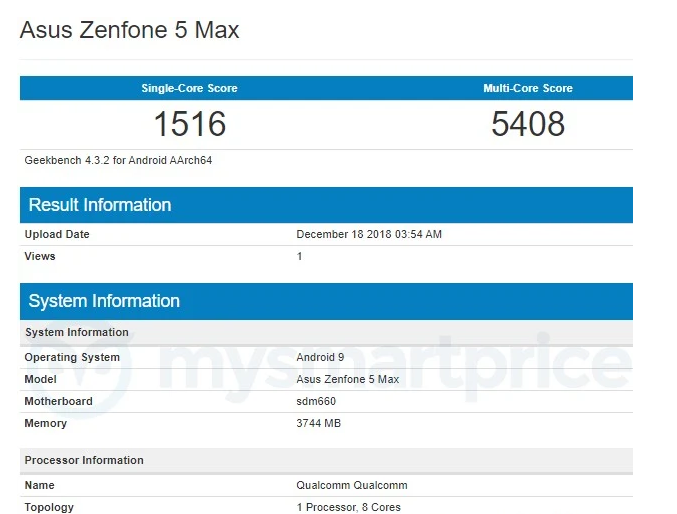 Geekbench doesn’t reveal other details other than the aforementioned. However, we expect the Asus Zenfone 5 Max to feature a larger battery capacity, a near bezel-free design as well as capable rear and selfie cameras, given that the Zenefone 4 Max offered decent battery and camera specs at a budget price.

It’s yet unclear whether the device will be announced before the year runs out or not.