Yesterday we’ve got surprised by the news of Huawei’s shipments hitting the 200 million mark in 2018. The achievement was reached despite all the problems that the company had with the US government, and the tepid performance of its smartphones in the Uncle Sam country, where the Chinese company is considered a national security threat. The company’s success was driven by the Huawei P20 series and Mate 20 series since both were well received by customers and industry analysts. 16 million of Huawei P20 series units have been sold, while the Mate 20 series achieved 5 million of shipments since its release in October. 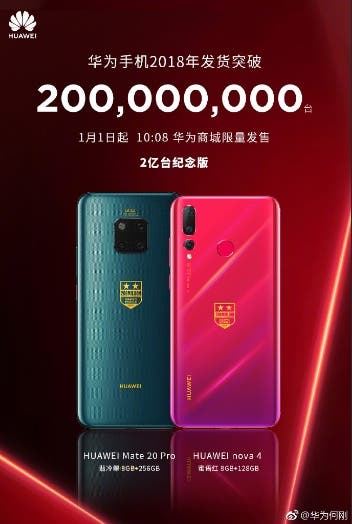 To celebrate the achievement, Huawei will unveil special units of its recent releases, Mate 20 and Nova 4 to join the 200 million connected Huawei smartphones in the world. He Gan, The president of the company’s smartphone division, made the announcement through its Weibo page. This special edition will be dressed in emerald and will feature 8GB of RAM and 256GB of storage. Huawei will also offer a special edition of its in-display camera smartphone, Nova 4, in Secret Red color.

Both models come with a very unique and special logo on its back that commemorates the 200 million Huawei phones shipped during this year. The pricing of both smartphones is yet to be announced, but we already know that both units will be available in China during January 1st at 10:08 local time.