A few hours after the release of the official update to Android 9 Pie for the Samsung Galaxy S9 and Galaxy S9 Plus, interesting details emerge on the new user interface of the Korean manufacturer, called Samsung One UI.

One of the innovations found by users is the software that manages the front camera, the mode called Selfie Focus has been renamed in Live Focus and now works like the Live Focus feature already present for the rear camera. 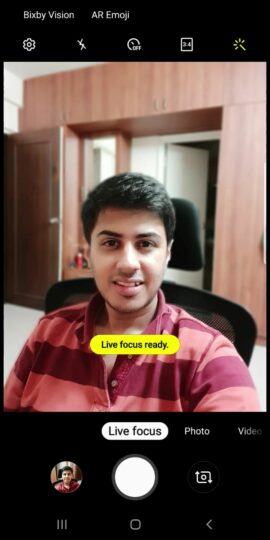 This means that now the camera will tell the user if it is ready to take a selfie in Live Focus (ie with bokeh effect) while previously you had to shoot blindly, hoping that the smartphone was able to blur the background.

Basically, with the new version of Samsung software, once framed the face in the camera, you will see a yellow popup that indicates that the Live Focus feature is ready.

Recall that the owners of the Samsung Galaxy S9 and Galaxy S9 has officially received the official release of the stable Android 9 Pie update, the Korean manufacturer, in fact, has started the deployment yesterday.

It is worth to mention that Samsung has published its One UI official introduction video on Youtube, presenting its main features.