Those who like Xiaomi should know it has its own voice assistant, namely Xiao Ai. Like Apple’s Siri, Samsung’s Bixby, Honor’s YOYO, VIVO’s Jovi, and others, it can wake up with a single phrase and do various things through voice commands. Today, Xiaomi said on Weibo that in 2018, the number of activated devices supporting Xiaomi’s built-in voice assistant had exceeded 100 million. 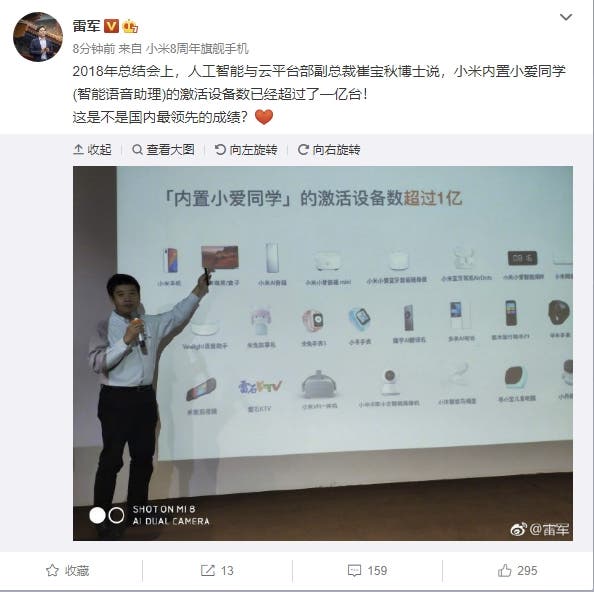 Xiao Ai is not only a common AI voice assistant that allows users to make various operations on their smartphones but also helps users to control Xiaomi Smart Home appliances. Thus, it’s used in many scenarios and has become users’ personal assistant.

According to the latest official data, the number of Xiao Ai wake-ups of Xiaomi smart speaker had exceeded 5 billion. The same data also disclosed the alarm clock set by this voice assistant is done by 853,000 people a day, which is 2.5 times the population of Iceland; as a ‘nanny’, Xiao Ai Speaker does 800,000 housework per day; as a media equipment, the Xiao Ai Speaker plays 1,354,221 hours of music every day; as an information book, the Xiao Ai Speaker tells stories to children 4,757 hours a day; broadcasts the weather 480,000 times per day, etc.

As you can see, Xiao Ai performs various operations and it has become the strategic feature of Xiaomi’s AIoT layout. Xiaomi Group has started the IoT layout since 2014 and has launched nearly 2,000 devices. The number of smart device connections exceeds 132 million. At the AioT Developers Conference on November 28 last year, Lei Jun announced that Xiao Ai’s cumulative number of activated devices was about 100 million, and the total number of wake-ups exceeded 8 billion (including Xiaomi smartphones). And the number of monthly active users exceeded 34 million.