The CES 2019 is in full swing, and as expected, the event isn’t much about mobiles phones, but rather we are seeing different tech giants unveiling smart TV, Laptops and gaming monitors. The Korean giant LG is at the show and has showcased a couple of products, among which is the impressive rollable OLED TV R that was first demoed at the 2018 CES.

While the OLED TV R that showed up at CES 2018 was a prototype, LG is at the 2019 show with a market-ready product that will hit the market later in the Sprint for a colossal, premium price. While nothing much has changed from the prototype earlier showcased in 2018, however, LG has made some subtle modifications among which is the addition of a 100-watt Dolby Atmos speaker for powerful built-in audio to the base. 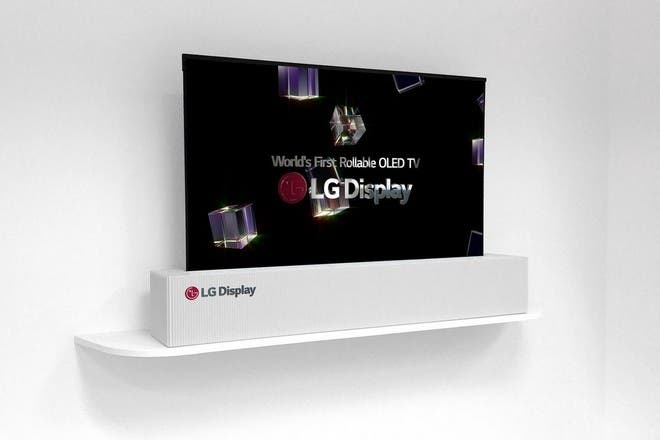 The OLED TV R is a nice piece of innovation that will surely pique your interest. The TV as seen below has a way of retracting into the base, and slowly elevated again when needed at the push of a button, which in essence means that ugly black panel can be out of your sight when not needed. The whole process of retracting and rolling out happens in a few seconds and is quite noseless, and on the subject f durability, LG claims the TV can take as much as 50,000 rolls, and like you know the parts responsible for the movement might fail at any point in time.

What is more, the OLED TV R has a functional mode that makes it act as a menu bar. In this mode which is dubbed the Line Mode, instead of the display completely retracting into the base, it drops down three-fourths the way so it can be used for on-screen music controls with the option to control your smart home gadgets.

The TV has a 4K OLED screen and is powered by the second generation Alpha 2 processor, LG’s latest WebOS with support for Amazon’s Alexa virtual assistant, Apple’s AirPlay 2 standard, as well as HomeKit integration.

The LG OLED TV R is set to hit the market in the second half of 2019, with no specific date, expectedly at a premium price yet to be made known.

Previous Huawei rises against U.S. firm InterDigital in China for failing to license its SEP patents