A few days ago, we announced that Xiaomi officially confirmed the appointment of ex Jinli boss, Lu Weibing into the company but did not state the capacity in which he will be working. Now, with the company set to unveil its new Redmi brand, Lei Jun has announced that the new person in charge of the independent Redmi brand is Lu Weibing.

In this notice, Lei Jun announced the appointment of Mr. Lu Weibing as the vice president of Xiaomi Group and the general manager of Hongmi Redmi brand, responsible for the brand building, product design, production and sales of Redmi products. He will report to Mr. Lin Bin, the president of Xiaomi, and this appointment takes effect from today.

With this appointment, the new independent Redmi brand may have some force in the foreign market (outside China) which is already key to Xiaomi’s recent successes.  Lu Weibing has a rich experience in the foreign market, thus we expect to see Redmi phones penetrate the foreign markets faster. Of course, proper competition between Chinese and non-Chinese brands better promote the development of the entire Xiaomi mobile phone. 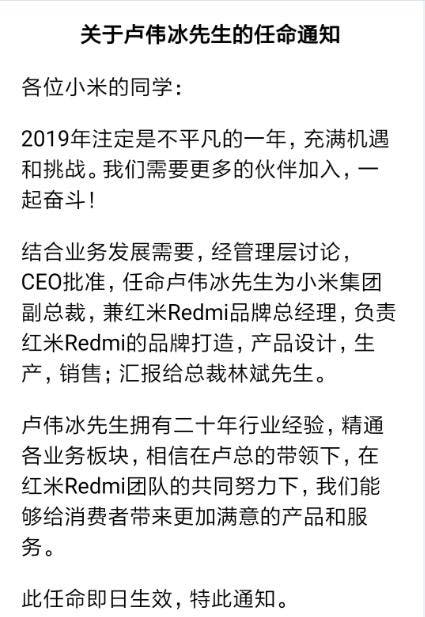 Lei Jun also revealed that the Xiaomi and Redmi brands were separated and developed in different directions to make the Xiaomi brand better. Redmi focuses on cost-effective smartphones and will mainly use the online marketing system while Xiaomi focuses on mid- to high-end devices as well as and new retail.