Does Samsung have unintentionally revealed the design of the Galaxy S10, its next high-end smartphone that is expected to be announced in late February at the MWC in Barcelona?

Samsung has published an article to illustrate the novelties of One UI, the new interface of its Android smartphones and tablets, which also begin to enjoy the Galaxy S9, S9+ and Note9 through an update arrived in advance compared to the original calendar.

This will include a new organization in the applications, with a lower part dedicated to interactions and an upper part reserved for content. We are also talking about a dark theme.

And precisely, the first picture in the article clearly showed a phone with rounded screen, small bezels and an in-display camera on the top right of the screen, just like the S10 leaks suggested. 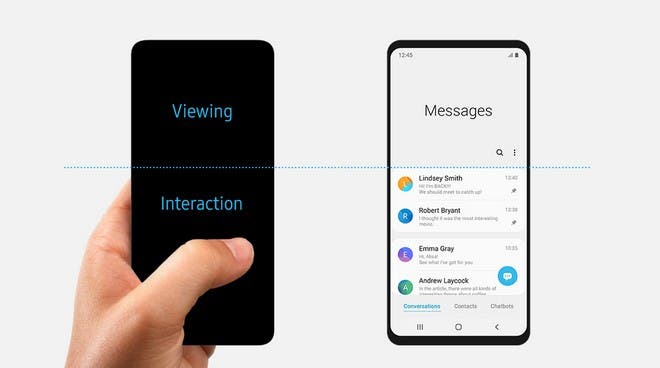 Later, Samsung has changed the article picture and the phone has disappeared from the graphic. they are clearly trying to hide the aspects of that render but we all know how it’ll look by now. Small top bezel, bigger bottom bezel and a punch hole camera.

It is worth to mention that a recent reports shows that Samsung has renamed its lite variant of the Galaxy S10 series to Samsung Galaxy S10 E. Mobile Fun has revealed this information while showcasing some phone cases for the upcoming Galaxy S10 series. It also said that the S10 and S10+ will be far more expensive than the S10 E.

Next Samsung confirms the launch date for the Galaxy S10