Samsung mobile earlier today confirmed it will be unwrapping the new Galaxy M series at an event taking place in India on 28 January, a few weeks before the global debut of the Galaxy S10 trio. The launch event teaser suggests the Galaxy M series will be adopting the waterdrop notch, making them the very first series from Samsung with the controversial design feature.

While there have been so many leaks and reports about the upcoming M series, the German site mobielkopen has now detailed specs and graphic illustrations of the Galaxy M20.

In line with previous leaks and renders, the Galaxy M20 will come embedded in an aluminum body complete with a fingerprint scanner and a dual-camera setup on the flip side, while the leak also confirm it will come fitted with a large 6.3-inch  Samsungs Infinity-U display with an LCD panel and resolution of 2340 x 1080p, or 409 pixels-per-inch. The device, though has a large 6.3inch display share ‘similar footprint with the Galaxy S9 – at 183 grams and 156.4 x 74.5 x 8.8mm.

Speaking of its photographic features, the leak has it that the Galaxy M20 will come fitted with an 8MP selfie camera, a 13-megapixel primary and a secondary 5-megapixel sensor with support for both autofocus and 4x digital zoom. Aside from packing some Sixteen different built-in filters, the Galaxy M20 has a number of camera modes including  Beauty, Continuous Shot, Live Focus, Panorama, and Pro mode –and also support AR stickers. 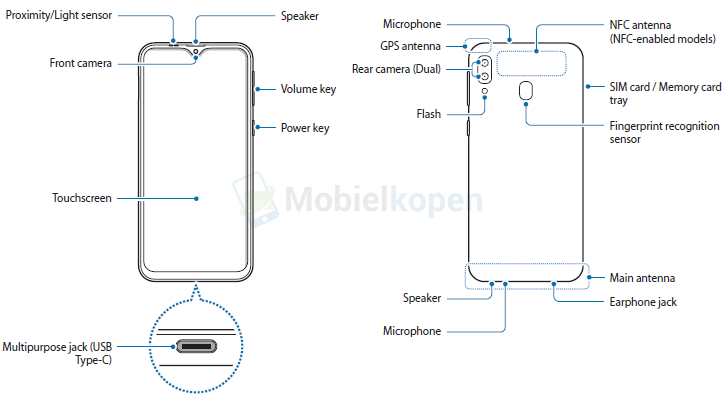 Under the hood, the latest leak has it that the device will house Samsung’s own Exynos 7885 coupled with 3GB RAM and up to 64GB of storage. The major selling point of the device will likely be its 5000mAh battery, and sadly enough, the Galaxy M20 will boot Android oreo out of the box.