Earlier today, Xiaomi President, Lin Bin, revealed on Weibo that Xiaomi Mi 8 was very popular among users for its FoD (Fingerprint on Display) feature. In order to further enhance the user experience of FoD, Xiaomi spent half a year in developing two core areas of this technology and the company has come out with a better and more efficient FoD feature. Lin Bin said the areas of the upgrade include 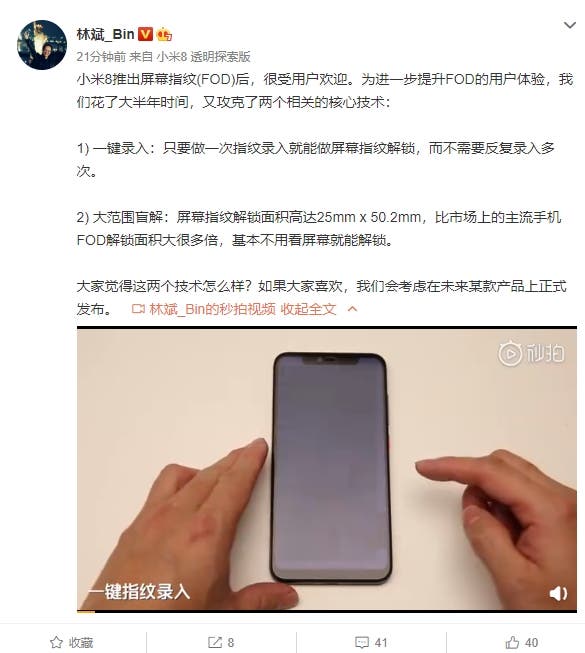 One-click Entry: This ensures that users get a response on the first click and you don’t have to use multiple clicks.

Increased Sensor Area: The screen fingerprint unlocking area is up to 25mm x 50.2mm, which is many times larger than the unlocking area of the mainstream smartphone in the market. It can be unlocked without looking at the screen.

Lin Bin said, how do you think these two technologies are? If you like it, will you consider it when it is officially released on a future product?Prior to this, Xiaomi Mi 8 Pro and Xiaomi Mi 8 Explorer Edition support on-screen fingerprint unlocking. However, these upgrades does not require only sofware devellopment, it infovels hardware change thus this new feature should be expected in Xiaomi’s upcoming flagship smartphone.