Chinese manufacturing giant, Meizu is set to unveil what it called the “real technology” tomorrow. Today, the company released a teaser which asked netizens to fill the blank space “World’s 1st_____”. The poster also reads “it is time to show the real technology, black technology, see you tomorrow”. 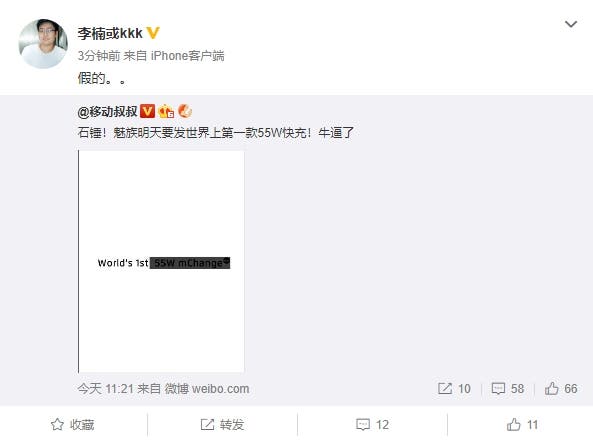 After a couple of tweaks and adjustment of the original image, netizens came up with the phrase “55W mChange” which was interpreted as “55W fast charge”. Soon after, it was all over the rumor mill that the company will release its new 55W fast charge tomorrow. This tech was showcased at MWC 2017. However, senior vice president of Meizu Technology, Li Nan, quickly dismissed the rumor and tagged it “fake”

Another interesting aspect of Li Nan’s post is that it was sent from an iPhone. Although, it’s listed that Li Nan’s current Weibo device is the Meizu 16 flagship smartphone. This is the first Weibo post by Li Nan since October 30, 2018. As of now, it is not entirely clear what the company plans to release although there are speculations that it could be a punch-hole camera phone. These are wild speculations and should be taken with a pinch of salt.