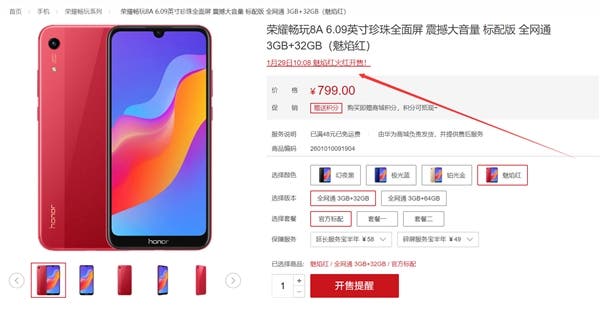 The major selling points of the Honor 8A is its “Pearl full screen” and “large volume.” It uses a 6.09-inch pearl screen with a resolution of 1560×720, a screen aspect ratio of 19.5:9, and a screen-to-body ratio of 87%. According to the official introduction, the Honor Play 8A display passed the TÜV Rheinland certification which means that it can effectively suppress the harmful blue light in the screen and reduce the damage to the eyes caused by long-term use of the mobile phone.

At the same time, the Honor Play 8A is equipped with an independent high-power Smart PA amplifier, the external volume loudness is up to 30% compared with the previous generation. With the super-linear speaker core’s voice coil diaphragm double suspension structure black technology, the acoustic vibration system is more balanced. It has a low frequency of 5dB which higher than the previous generation and the intermediate frequency is increased by 2dB.

In the core configuration, the Honor Play 8A is equipped with MediaTek Helio P35 processor. In the camera department, it has an 8MP camera for selfies and a 13MP rear camera. This smartphone runs on EMUI 9.0 system and it has a 3010 mAh battery to keep its light on.