The Mobile World Congress for 2019 (MWC2019) would hold in Barcelona, Spain between February 25th and February 28th. HMD Global, the owners of the Nokia brand has confirmed that it will participate in the event and there are rumors that Nokia will release its new flagship model Nokia 9 PureView. However, there are reports that the company may be lining up a series of smartphones for the event and one of them is the Nokia 1 Plus. 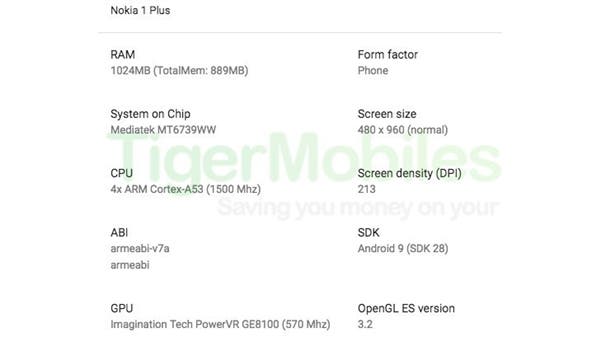 Recently, the rumor mill speculated that this device is an entry-level model, inferring that it may be an upgraded version of the Nokia 1 which was announced in February 2018. Today, we stumbled on a new leak regarding this smartphone. The leaked information includes some key configuration specifications, The resolution will be upgraded to 480 x 960 and the aspect ratio is 18:9. Although the specific screen size is not revealed, the Nokia 1 Plus should be a 5-inch display device considering the DPI pixel density of 213.

From previous information, the Nokia 1 Plus is powered by a MediaTek MT6739WW chip which has four Cortex-A53 cores clocked at 1.5 GHz and a PowerVR GE8100 GPU running at 570 MHz. The chip is supported by 1GB of RAM (the total memory is actually 889MB) and it will run on Google’s Android Go system. As for the price, it is not expected to exceed $100.

Next Nubia to also announce 5G terminals this year