LG G8 ThinQ is getting closer to the launch, according to the latest rumors on the occasion of Barcelona ‘s Mobile World Congress 2019. And since there is over three weeks left, it’s normal to start hearing about the new high end smartphones from LG.

A couple of days after the arrival of LG V40 ThinQ the spotlights are already moving on the new smartphone from the G series, a device that at least aesthetically should be quite similar to its predecessor, according to leaked images.

However, there are few rumors related to the technical data sheet although it is hypothesized that the new Qualcomm Snapdragon 855 should come on board, under a 6.1-inch display probably IPS.

However, among the few more or less credible news that we have, we have a particularly relevant news concerning the capacity of the battery. Mobiel Kopen website have found battery certification documents of the Brazilian certification institution Anatel. The certificate is issued to LG Electronics for a Li-Ion battery with model number BL-T41 of 3,400 mAh, a model that would be attributable to the case of LG G8 ThinQ (codename Alpha). 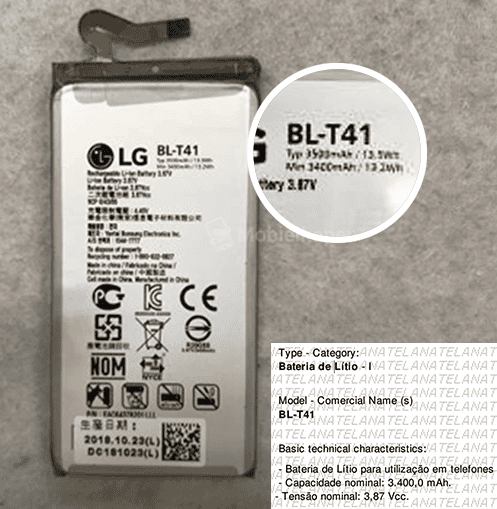 If this were to be, it is clear that there is a the step forward compared to 3,300 mAh of LG V40 ThinQ and especially compared to 3,000 mAh of G7 ThinQ. So, what do you think of this LG G8 ThinQ ? The comment box below is as always at your disposal.

Previous This could be Huawei's foldable smartphone

Next 2019 iPhone will be equipped with three cameras