Chinese smartphone manufacturer – Coolpad has launched the CoolPad Cool 3, the company’s latest entry-level smartphone in India, following yesterday’s official invite/teaser. The phone is priced at Rs 5999/$85 and that puts it in direct competition similarly priced Xiaomi phones like the Xiaomi Redmi 6A. In fact, the maker claims the device is phone within its price range to boot Android 9.0 out of the box and a dewdrop notch at the top.

Aside from the dewdrop notch, the Coolpad Cool  3 features a dual-color glossy back cover with edges highlighting in different colors. It comes fitted with a rear fingerprint sensor, a dual rear camera setup and will hit the shelves in Midnight Blue, Ruby Black, Ocean Indigo, and Teal Green color options.

The device flaunts a 5.71-inch HD+ display with a dewdrop notch, 90% STBR and is powered by a Unisoc chipset with AI and AR/VR compatibility, 2gb RAM and 16GB of storage. It gets a 3000mAh battery, a dual (8MP + 0.3MP) rear camera sensor, 5MP sensor camera sensor with face unock, and a rear fingerprint scanner. 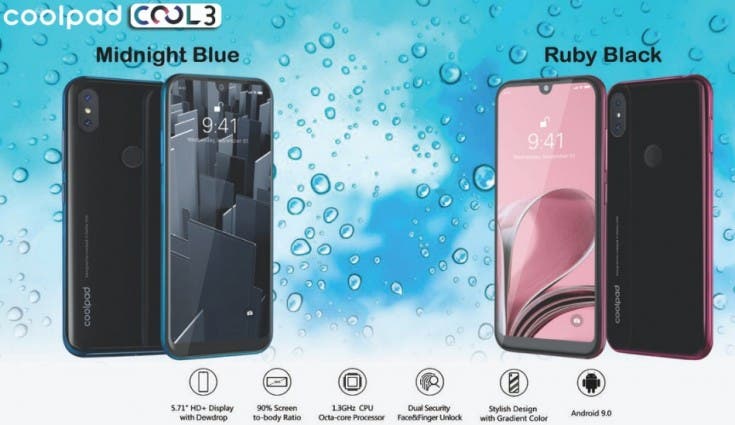 Previous Google spent $7.4 billion on being the default search engine for iOS and other ways to acquire traffic in Q4 2018

Next Samsung Galaxy M20 set to land in Indonesia on Feb. 14