Today, we learned the next-gen Xiaomi flagship model of the Mi 9 will debut on February 20. As the official announcement says, on the mentioned date the Mi 9 not only will be uncovered but also it will demonstrate its whole power.’ Immediately after this announcement, Black Shark Technology CEO, Wu Shimin issued a statement on Weibo, saying the Mi 9 can look good and perform quite well, so how to describe their own new product? This made many users assume the new-gen game smartphone of the company is already ready to hit the market.

Moreover, before the introduction of the Xiaomi Mi 9, Black Shark product director Wang Teng Thomas said, ‘The new Black Shark is full of personality and very cool.’ At present, we know the new Black Shark is codenamed ‘skywalker’ and has already managed to appear on the GeekBench. It’s another hint at the upcoming launch of this handset.

The GeekBench page showed that the new Black Shark phone is equipped with the Qualcomm Snapdragon 855 flagship platform, which is paired with an 8GB of memory, runs on Android 9 system, and scores 3494 and 11149 in the single-core and multi-core tests, respectively. Thus, the performance is quite strong. 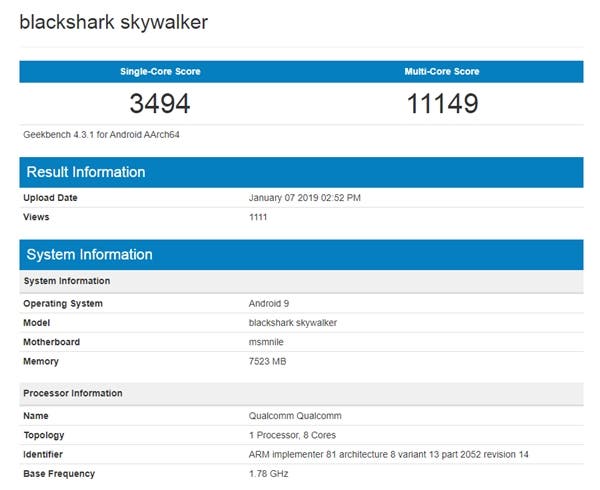 Undoubtedly, the new Black Shark will belong to the category of game smartphones, trying to win back its predecessors’ former popularity. Wu Shimin said that the game smartphones don’t have a pseudo-demand, the players are not satisfied, and users more and more want to switch to game smartphones. But the game smartphone manufacturers are worried that only the smartphone hardware is not enough. So they should add some new features to their phones to become more competitive.