Chinese manufacturer, Xiaomi, revealed the launch date of its upcoming Xiaomi Mi 9 yesterday. During the official introduction, the company said that the internal name for this smartphone is “Battle Angel” because Lei Jun wanted this smartphone to be beautiful and hardcore thus it can battle any device available. However, Honor’s vice president, Xiong Junmin took a swipe on Xiaomi while talking about the Honor V20. 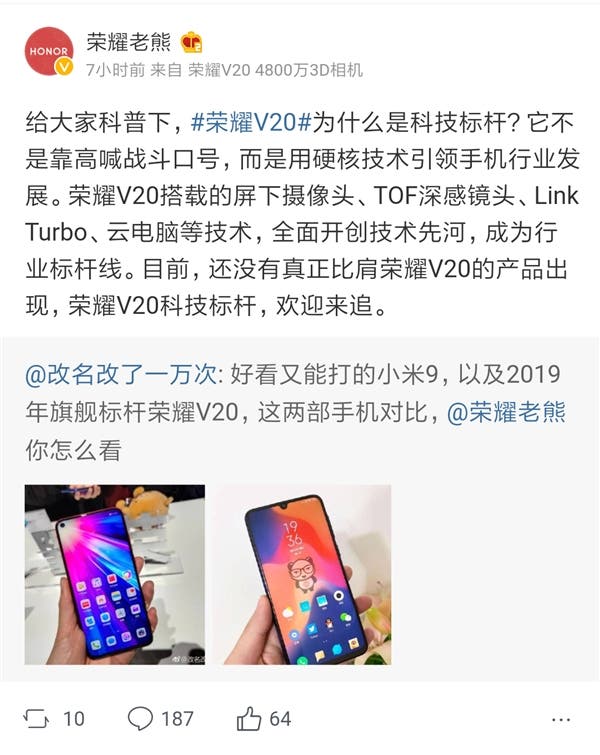 Xiong Junmin asked “do you know why we consider Honor V20 as a technology benchmark? It does not rely on a battle slogan (the internal name of Xiaomi Mi 9 is “Battle Angel”) but uses hardcore technology to lead the development of the mobile phone industry. He added the Honor V20 on-screen camera, ToF deep-sensing lens, Link Turbo, cloud computer and other technologies have pioneered technology and become the industry benchmark. At present, there is no real product in the market that rivals Honor V20. The Honor V20 technology benchmark is available for chase”. This is what Xiong Junmin thinks. Xiaomi is yet to respond to Honor’s statement but Xiaomi will probably not respond. However, Redmi will likely do.

The Honor V20 was released on December 26, 2018. The smartphone uses the glamorous full-screen, and the front-mounted 25MP camera is hidden under the screen. This is the first glamorous full-screen mobile phone of Honor. In the core configuration, the Honor V20 is equipped with the Kirin 980 processor coupled with up to 8GB of RAM and 256GB of internal storage. Worth mentioning is its 48MP (Sony IMX586) camera + TOF stereo deep-sensing lens with a battery capacity of 4000mAh. In addition, the Honor V20 is equipped with Link Turbo full-network aggregation technology. WLAN and LTE are online at the same time, allowing you to enjoy a stable and low-latency network in the game. At the same time, the network speed can be superimposed and the video can be downloaded quickly.