Since the official announcement of the release date of the Xiaomi Mi 9, there have been a series of information regarding this smartphone. Today, Xiaomi co-founder and senior vice president, Wang Chuan, said that the Mi 9 is a beauty to behold in all aspects. He said the camera and design are captivating. 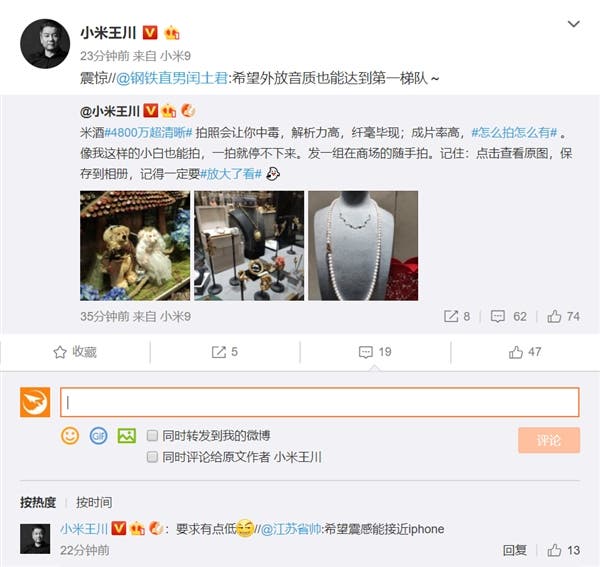 However, some netizens wanted to know about the sound quality and asked if the sound quality is comparable to the mainstream industry. Wang Chuan by saying “you will be surprised” suggesting that the Xiaomi Mi 9 also has a pass mark in that regard. In addition, Wang Chuan said that the Mi 9 surprise will surpass the iPhone, suggesting that the machine may have a built-in linear motor.

Not only that, this smartphone also has a high-value body. It uses a nano-scale laser holographic process + double-layer coating, which can present a colorful and dazzling aurora color when light sweeps through it. In the core configuration, Xiaomi Mi 9 will be equipped with a Qualcomm Snapdragon 855 flagship platform, it comes with a triple rear camera setup and also comes with an on-screen fingerprint sensor. In terms of price, Pan Jiutang, a former partner of Xiaomi Industry Investment Department, said that the Mi 9 said that with the known configuration of this device, the price should be about 4000 Yuan ($590).