Having two or more companies schedule launch events for the same day during a big trade show like CES, MWC, or even IFA,  perhaps isn’t something out of the ordinary. But the bigger brand will surely get the most of the attention, leaving the lesser known one in the dark. OnePlus back in October had to reschedule the OnePlus 6T launch date for clashing with the Galaxy Note 9 launch date, the reasons are not far fetched.

Well, Chinese tech giant Xiaomi is having a launch event on February 20th – the same date Samsung is billed to officially unveil the Galaxy  S10 series and the Galaxy Fold. The event unlike that of the OnePlus 6T that took place in the States will be held in China where Xiaomi has most of its fans.

‘Besides issuing media invites, other details regarding the Xiaomi Mi 9 are still officially under unwrap, but we do know a few things about the device all thanks to a series of leaks and rumors. Based on previous leaks, the Xiaomi Mi 9 will come flaunting a 6.4-inch AMOLED panel with a 1080 x 2220 resolution with the SD 855 SoC under the hood.

The device when launched will probably be one of  Xiaomi’s best-looking smartphone -next only to the Mi 6. Also, the device is tipped to feature a three rear camera setup which should consist of a 48MP sensor, a 12MP secondary snapper, and a 3D Time-of-Flight depth sensor. 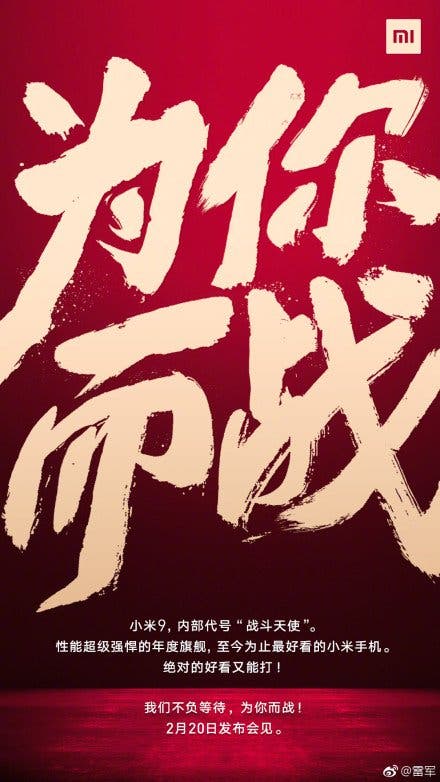 Much like the LG G8 ThinQ, the Xiaomi Mi 9 will reportedly retain its 3.5mm headphone jack, Type C port, and fast battery charging 32W support. It passed through TENAA yesterday with partial specs, but we should bring you the full updates.

Xiaomi Company announced that it will release Xiaomi 9 on February 20. pic.twitter.com/JbJ3mvbYHV

Previous Here's the LG G8 ThinQ in all its leaked glory