As anticipated, Samsung is working on a new Galaxy tablet with the model number SM-P205, whose presumed characteristics emerged yesterday on Geekbench.

According to the informations reported, the tablet is powered by an Exynos 7885 SoC flanked by 3 GB of RAM and 32 GB of internal memory. The pre-installed operating system is Android 9 Pie while the color options are black and gray.

The device obtained a score of 1329 in single-core and 4150 in multi-core, on a par with the other scores achieved by the SoC Exynos 7885 on Geekbench. 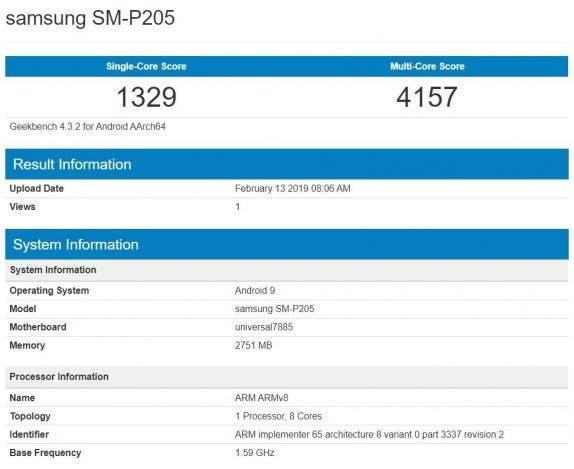 Another detail that can be seen in the image above is the inclusion of the letter “P” in the model number, which is not in line with any of the existing Galaxy tablets series, making it difficult to understand how the company intends to place this device.

Since the firmware development started months ago and the tablet has now made its appearance on the benchmark sites, the launch may not be too far, however it seems unlikely that the device will make its appearance at the Galaxy S10 Unpacked event 2019 or at the Mobile World Congress later this month, and even if it were, it certainly will not steal the show from the new galaxy S10 smartphones.

It is worth to mention that according to Strategy Analytics, the latest research report, which shows the global tablet market shipments fell 1% in Q4 in 2018, 2018 year-on-year decline of 6% to 173.8 million units. At the same time, we can see that Apple, Samsung, Huawei, Amazon, and Lenovo are considered to be the top five tablet makers in the world. It’s also noteworthy, Samsung posted its first global quarterly shipment growth since 2014.

The tablet market may be on the road to recovery as several major vendors have strengthened their hand in 2018, cannibalizing market share from weaker players and forcing some to consolidate or leave the market entirely. Lower Slate prices and a more fragmented Detachable 2-in-1 market play into this recovery as vendors are reaching a broader range of computing needs, just as the foldable tablet/phone makes its debut.

Previous Oppo: There will be no Oppo R19 with SD855 this year