Today, oppo published a promotional video of oppo F11 on Weibo. This smartphone is a global version and the corresponding Chinese version is speculated to be the oppo R19. The biggest highlight of this device remains its pop-up camera and the rear 48MP main shooter. While the company has confirmed the existence of oppo F11, it denied the coming of oppo R19 this year. 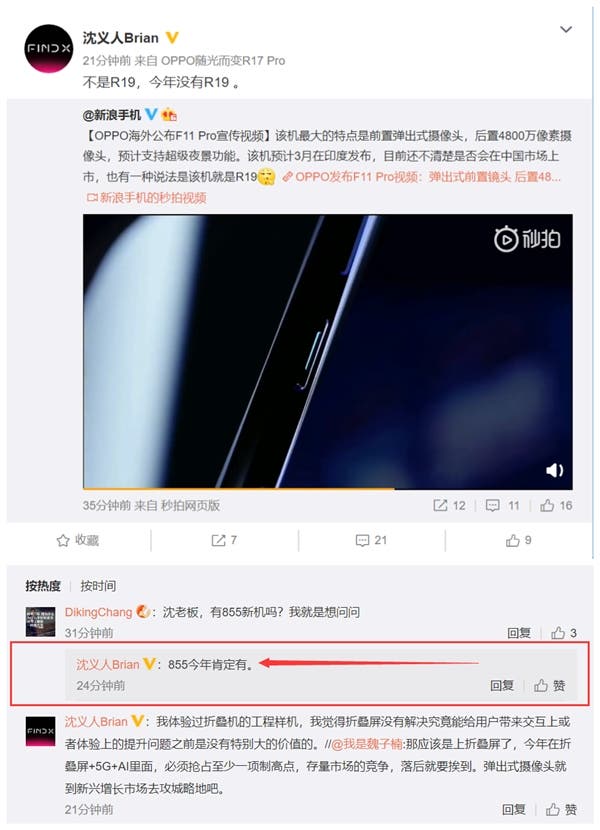 Shen Yiren, vice president of oppo was asked about the oppo R19 and he said: “not R19, this year there is no R19”. In addition, he confirmed that OPPO will launch a smartphone with Snapdragon 855 this year but it will not be oppo R19. At present, the oppo’s SD855 flagship smartphone codenamed is “POSEIDON” and it has appeared on GeekBench.

It is worth mentioning that OPPO will show its 10x hybrid optical zoom technology at MWC2019. This tech is now ready for mass production and it has reached a commercial level. According to the official introduction, OPPO 10x hybrid optical zoom technology pioneered the periscope structure, it uses a super wide-angle, ultra-clear main and telephoto three-shot structure, covering the “complete perspective” from super wide angle to telephoto. On the ultra-clear main camera and telephoto camera, OPPO introduces dual OIS optical anti-shake, making it easy to take clear pictures.