Earlier today, Honor’s vice president Xiong Junmi took a jab at Xiaomi by saying that the “Honor V20 does not rely on a battle slogan (the internal name of Xiaomi Mi 9 is “Battle Angel”) but uses hardcore technology to lead the development of the mobile phone industry. He added the Honor V20 on-screen camera, ToF deep-sensing lens, Link Turbo, cloud computer and other technologies have pioneered technology and become the industry benchmark…”. Although Honor took a swipe at Xiaomi, it was the company’s sub-brand, Redmi, that responded. 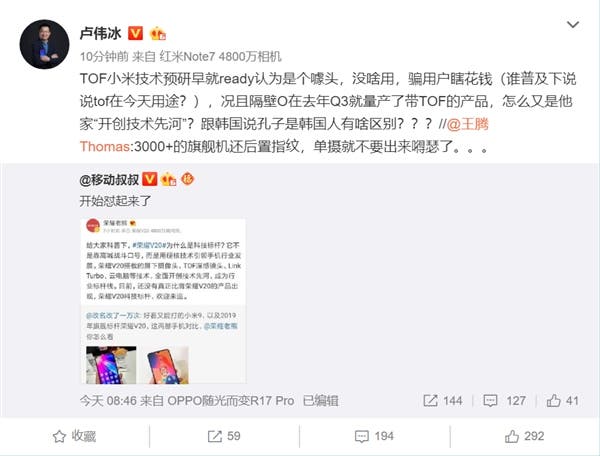 Lu Weibing, vice president of Xiaomi Group and general manager of the Redmi brand, said that the ToF technology paraded by some brands is a gimmick that is used to deceive users to spend money. He added that there have been products with ToF (note that OPPO R17 Pro is the world’s first mobile phone equipped with a ToF lens), how are they the first to use this marketing gimmick?

When the Redmi sub-brand gained its independence, many speculated that this brand is positioned to compete with Honor However, Honor is trying to place itself at par with Xiaomi and not Redmi. Nevertheless, Xiaomi refused to mix issues with Honor (which they perceive to be smaller) rather, its sub-brand decided to accept the dig.

Next Oppo: There will be no Oppo R19 with SD855 this year