The US market differs from the Chinese market. Due to the strict patent system and the tight control of operators, only a few smartphone brands from China are developing here. But OnePlus is something else. Today, the company’s official Twitter channel announced the data released by IDC, according to which, OnePlus officially ranked among the top five in the US high-end smartphone brands in the Q4, 2018. 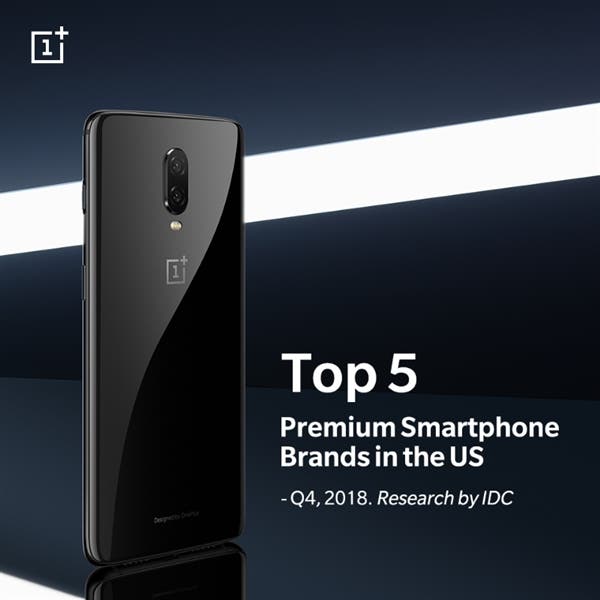 What’s interesting, this is less than half a year since the release of the OnePlus 6T. As you know, the OP6T was launched in the United States on October 29, 2018. At the same time, it entered into cooperation with T-Mobile and officially entered the mainstream US carrier market.

The US smartphone market is currently dominated by carrier channels. A new smartphone brand must cooperate with US operators to negotiate and test multiple processes. Before the smartphone is listed, it needs to pass the US national access certification (FCC).

In the United States, T-Mobile is the third-largest operator. Due to the cooperation with T-Mobile, the OnePlus 6T is available for purchase at T-Mobile’s more than 5,600 offline stores.

OnePlus founder and CEO Liu Zuohu said that before the cooperation with the US operator T-Mobile, the sales in the US market mainly depended on the online channels. In 2017, their global revenue doubled to $1.4 billion, with the North American market growing by 139% and accounting for 25% of the company’s online sales. This clearly indicated that OnePlus can get more from this market, and now we see it is competing with the world’s top smartphone brands.

Actually, this result is quite logical, because OnePlus belongs to the type of smartphone makers that design a couple of smartphones in a year. Such a strategy is adopted by Apple. And we have to say that it works.

Previous Asus Negotiates With Tencent To Launch a Gaming Smartphone

Next Xiaomi to crowdfund a new smartwatch on Feb 19