The launch date for Xiaomi’s upcoming flagship smartphone, Xiaomi Mi 9, has been announced and Xiaomi’s president, Lin Bin, said that the camera of the Xiaomi Mi 9 is “powerful”. He used a one hundred yuan bill to make his statement. The first image is a shot with the Mi 9 without zoom while the others are enlarged. Despite the zoom, the details of the images are still very clear and little lines can still be made out. 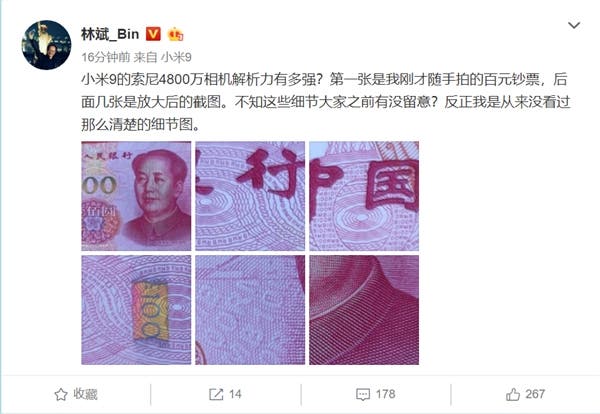 According to the camera spec that was released for the Xiaomi Mi 9 earlier today, it is reported that the Xiaomi Mi 9 is equipped with a 48MP Sony IMX58 wide-angle lenses, 12MP sensor and a 16MP super wide-angle lens all on the rear. Lei Jun, founder, chairman, and CEO of Xiaomi Technology said that Xiaom Mi 9 camera supports four-in-one imaging, and the single-pixel photosensitive area is four times that of the original. The synthesized 1.6μm large-pixel night photography has the advantages – the image is not only brighter but the details are also sharp with the super night scene feature

In addition, the Xiaomi Mi 9 supports the laser hybrid focusing, in which the laser focus can effectively improve the focus success rate in the case of a low-light environment where the contrast is not obvious enough. In a dark environment of about 1 lux, it can also successfully focus. At the same time, laser focus can also achieve face tracking assisted focus, and can also be used to optimize white balance debugging through infrared spectrum detection. It is worth noting that Lei Jun emphasized that Xiaomi Mi 9 provides adequate protection for the lens. It is wrapped in a stainless steel frame, and then the sapphire glass covers all three cameras. The sapphire glass area is as high as 243 square millimeters, so there is no need to worry about the lens being scratched.

Next Xiaomi Mi 9's processor and camera are expensive