It is already known that the Xiaomi Mi 9 will be launched on February 20th. The company has also revealed that this smartphone will be powered by a Qualcomm Snapdragon 855 SoC but so far, there has been no mention of 5G. In the camera department, Lei Jun, CEO of Xiaomi said that the Mi 9 will come with a 48MP Sony IMX586 sensor + a 12MP portrait lens + a 16MP super wide-angle lens. This is the first smartphone from Xiaomi to use a triple rear camera setup. 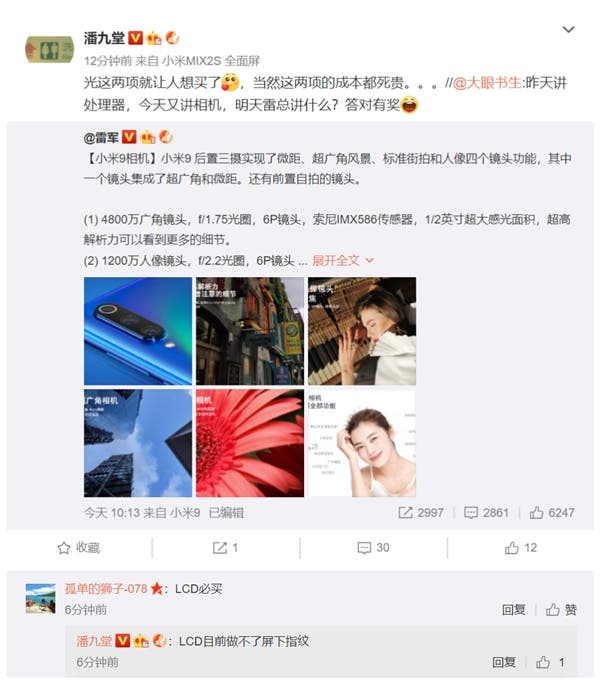 Today, Pan Jiutang, a partner of Xiaomi Industry Investment Department, said that the processor and the camera of this device will make people want to buy Xiaomi MI 9. Of course, the cost of these two are expensive, he added. Lei Jun also said that Xiaomi has spent a lot on the camera of the Xiaomi Mi 9.

Xiaomi recently said that the Mi 9 will be the world’s premiere Snapdragon 855 smartphone and it appears that the company is not far from the truth. Although the Lenovo Z5 Pro SD855 version was released last year, this smartphone is hardly available. Xiaomi termed Lenovo’s introduction of the Snapdragon 855 a “fake start”. It explained that a “fake start” is releasing a device that netizens cannot buy because it is always out of stock. The company assured Mi fans that it has prepared well for the Xiaomi Mi 9 and its stocking wouldn’t be a problem.

Next Honor V20 Going To India Through MyJio and Reliance Digital