The last of the Huawei P series smartphone Huawei brought to the Barcelona tech show is the Huawei P10. The Chinese brand, although was present at last year’s MWC left out the Huawei P20 for a separate event later that year in March.

Although there are no reports of official invites yet, a teaser video seen on Weibo says the Huawei P30 series is scheduled to be launched in Paris, France on March 26th.

Similar to the P20, the Huawei P30 is expected to launch in three variants – the Huawei P30 Lite, the P30, and Huawei P30 Pro. While information regarding these devices are scarce, previous reports

This leak doesn’t tell us anything else, but previous reports suggest the P30 and Huawei P30 plus will feature AMOLED screens with 1080 x 2340  resolutions, a triple-lens camera on the Huawei P30, and a quad-lens camera on the P30 Pro. The phones are also sure to use Googles latest OS, as well as Huawei’s new Kirin 980 chipset, which made its debut on the Huawei Mate 20 range. 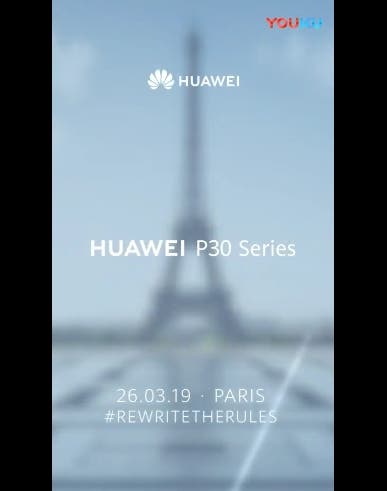 Next CUBOT X19 finally available for a special $119.99 price