The Redmi Note 7 was a nice surprise that debuted the “Redmi” name as a separate sub-brand from Xiaomi Mi-series. The device was released last month in China, with a gorgeous gradient finish and camera setup that is capable of producing 48MP shots. However, despite all the pros of the smartphone, a lot of complaints surfaced regarding to the presence of a 2-year old Snapdragon 660. Although the SD660 is a powerful chipset, it came too late, now in 2019, for the Redmi series. Soon after the release of Note 7, the company stated that a Redmi Note 7 Pro variant would arrive soon.

A few days ago, Redmi CEO said that the highly-anticipated Redmi Note 7 Pro would be revealed this week, despite the fact that date hasn’t been specified, we already know that the brand will be holding an event on February 28 to reveal the Redmi Note 7 in India. According to the popular leakster, Ishan Agarwal, the two variants of the Note 7 will be revealed in India. If Agarwal is correct with his claim, then India will be the debut market of the Note 7 Pro, the same has happened with the Redmi Note 5 Pro last year, which was revealed first in India, reaching China and Global markets only in March 2017. 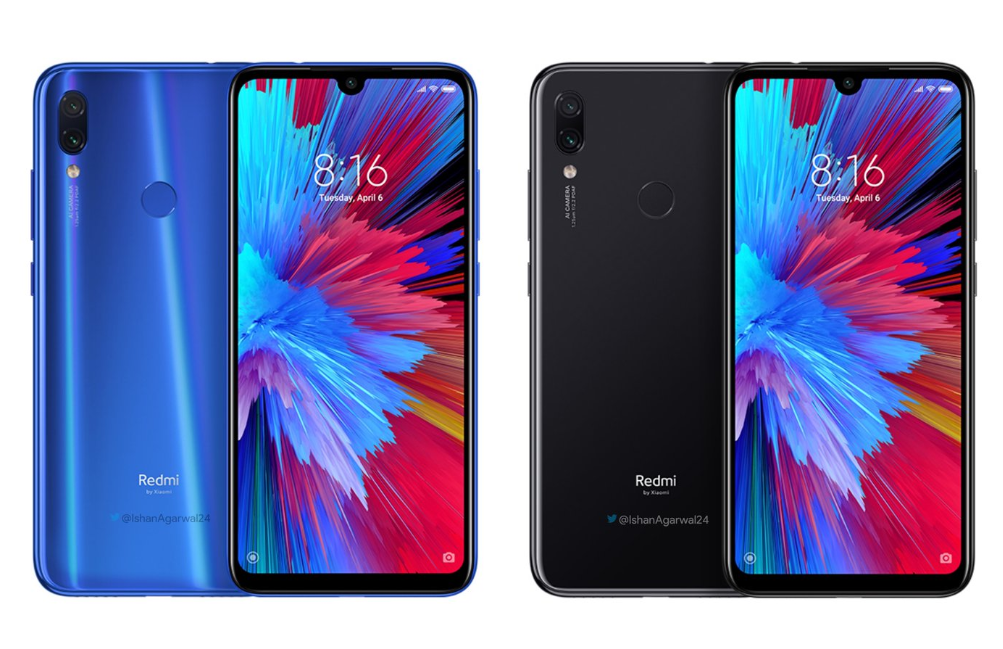 Ishan Agarwal also took the opportunity to share leaks of the Redmi Note 7 Pro press renders. The leak coincides with what we’ve seen earlier today through TENAA, revealing a smartphone that is nearly identical in design to the Redmi Note 7. However, judging by these renders we know that the Redmi Note 7 Pro will arrive in three additional colors – Black, Blue, and Red. We just hope that the gorgeous gradient colors are included in the package as well.

Last but not least, the tipster claims that Note 7 Pro will come in 4GB RAM + 64GB of Storage configuration. But it’s worth noting that Redmi’s CEO itself already said that the 7 Pro variant would boast 6GB RAM + 128GB of Storage, let’s assume that the device will be released in at least two RAM/Storage variants. Unlike the Redmi Note 7, the Note 7 Pro is expected to boast a more powerful 48MP sensor manufactured by Sony, which is better and more powerful than the Samsung’s sensor used in the standard variant. Also, the handset is expected to be powered by the modern Snapdragon 675 SoC.

Assuming that the Redmi Note 7 Pro will finally become a reality on February 28, don’t forget to set a reminder for the next Thursday.