The OPPO F11 pro – the Chinese phone maker next mid-ranger is just around the corner and it appears it appears it will ditch the notch for a pop-up selfie cam. This has been reported a lot in recent time and more recently confirmed by a promo image and video revealing the device in Thunder Black and Aurora Green colors as well as a pop-up front camera.

While all the buzz about the device has been all about the pop-up camera and the rear cam, we have some info on the upcoming device courtesy of the Geekbenc.

The alleged OPPO F11 pro listed with the OPPO CPH1969 model number SM-A9200  was seen running with Android 9.0 Pie with Helio P70 and 6 GB RAM. The test says the device faired quite well in relation to other devices powered by the same Helio P70, with a single-core and multi-core scores that are in line with the Realme U1 for example.

While that’s pretty much all the Geekbench listing revealed about the upcoming OPPO F11 Pro, previous leaks and rumors point to a notchless OPPO F11 Pro featuring a 48-megapixel primary rear camera along with a secondary rear camera, a 6.5” screen, 4,000 mAh battery, and up to 128 GB storage. 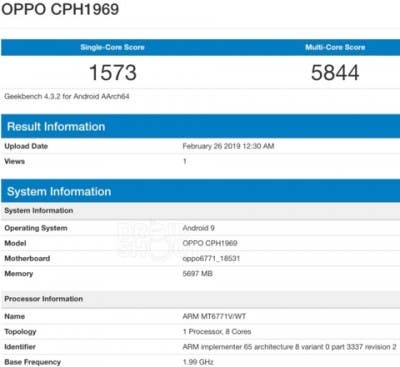 Whether or not these are true remains to know, but One thing is for sure, we will get to know all there is to know soon, even as the official launch date gets closer.

Previous Xiaomi Mi 9 Has Sufficient Stocking, But It Takes Care of Both Online and Offline Platforms