The Oppo F11 Pro is set to go official early next month. It will be the first Oppo device to boast a pop-up camera similar to Vivo in the mid-range segment of the Indian smartphone market. There are some details that were known when the teaser and homepage went live on the Indian portal of Oppo, however, a new leak has given us almost the entire spec-sheet of the phone much ahead of launch. The F11 Pro will succeed the F9 Pro in India. 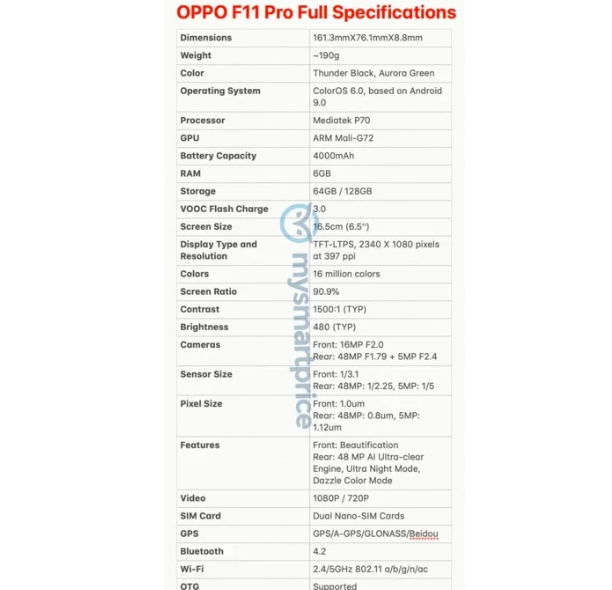 The spec-sheet shows Oppo’s mid-range handset will come with Color OS 6.0 based on Android Pie making it one of the very few Oppo devices with the latest OS. While not many Indian smartphone users prefer MediaTek Oppo has reportedly opted for a Helio P70 chipset in its latest pop-up camera smartphone. The handset will have 6GB RAM with either 64GB/128GB of storage. What’s more curious is that Oppo has advertised a VOOC 3.0 charging tech to debut with the new phone which is the first time we’ve heard of it. OPPO recently unveiled its Super VOOC tech – the second-gen of VOOC and is suddenly now teasing VOOC 3.0 which does seem confusing at first. There isn’t much detail as to what this new fast charging tech entails but we will find out soon. The display is expected to be a 6.5-inch Full-HD+ TFT panel with 397ppi. The battery is expected to be 4,000mAh and the rear camera configuration has been teased before. The smartphone launches on March 5.