Vivo’s recently announced IQOO sub-brand will announce its first smartphone, and flagship, on March 1, next Friday. The company already confirmed some of the features that are set to debut with the smartphone. One of the hottest features is, of course, the so-called 44W fast-charging system. Today, a couple of screenshots leaked showing that the tech used in the IQOO’s smartphone will be able to fully charge its 4,000mAh battery in under 50 minutes. 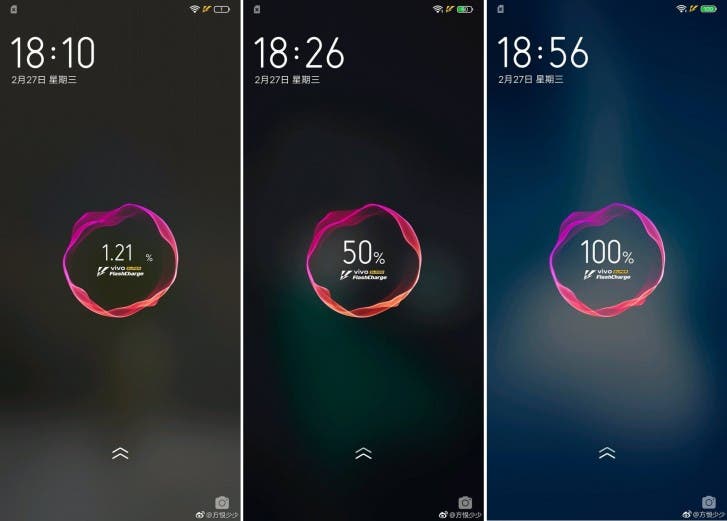 The leaked screenshots show the smartphone battery level going from 1 to 100% in just 46 minutes. The smartphone charges from 1% to 50% in just 16 minutes, but from that point, it takes the double of the time to finally reach the 100% rate. Of course, this isn’t a surprise, and it’s a natural behavior across the majority of fast charging technologies that are meant to quickly provide a top-up to the battery and then slowing down the charging speed in order to prevent any harm to the battery.

According to the leaked pictures, the 44W fast charging tech will be called Vivo Super FlashCharge, or perhaps just Super FlashCharge. After all, despite Vivo’s influence, this smartphone is set to debut a standalone sub-brand.

iQOO’s smartphone will boast the Snapdragon 855 paired with up to 12GB of RAM and 256GB of internal storage. The handset will boast a 6.4-inch AMOLED display with 2340×1080 pixels of resolution and 19:5:9 aspect ratio. Furthermore, it will boast a 13MP + 12MP + 2MP triple camera setup on the back and a single 12MP selfie camera will be placed within the waterdrop notch at the front. The handset will run FunTouch OS and will be fueled by a rather large 4,000mAh battery.

The device is set to be revealed just a day ahead, so we’ll not need to wait much longer to know all details about this ṕowerful handset.