We’ve started to hear about Vivo’s sub-brand IQOO just a few days ago, and since then, the leaks about their very first flagship started to pop-out everywhere. Now a new hands-on video was posted in Weibo, giving a small glimpse of the upcoming handset, also another leak surfaced showing a labeled graphic of the smartphone.

The video part of this leak was reposted in a tweet which shows a small part of the hands-on video made by a Chinese outlet. The leaked video shows the handset in two colors: Blue and Red. We can also have some close-up of the triple-camera setup that is present in the IQOO’s handset. There’s also the ultra-reflective frame which matches the reflective pattern on the rear glass of the smartphone.

Judging by this leak, the smartphone runs FunTouch OS and boasts a tiny waterdrop notch. At the final of the video, there are two prices in Chinese Yuan. According to it, the iQOO phone price starts at 3,999 Yuan (~$598) and the premium variant will go for as much as 5,999 Yuan (~$898). According to rumors the smartphone will be available in multiple variants with 6GB RAM + 128GB Storage, 8GB RAM + 256GB Storage, or 12GB RAM + 256GB of Storage.

The video confirms the display resolution of 1080×2340 pixels which results in a 19:5:9 aspect ratio. The handset also leaked in what seems to be a labeled graphic that usually comes inside a quick starting guide of a smartphone retail packaging. 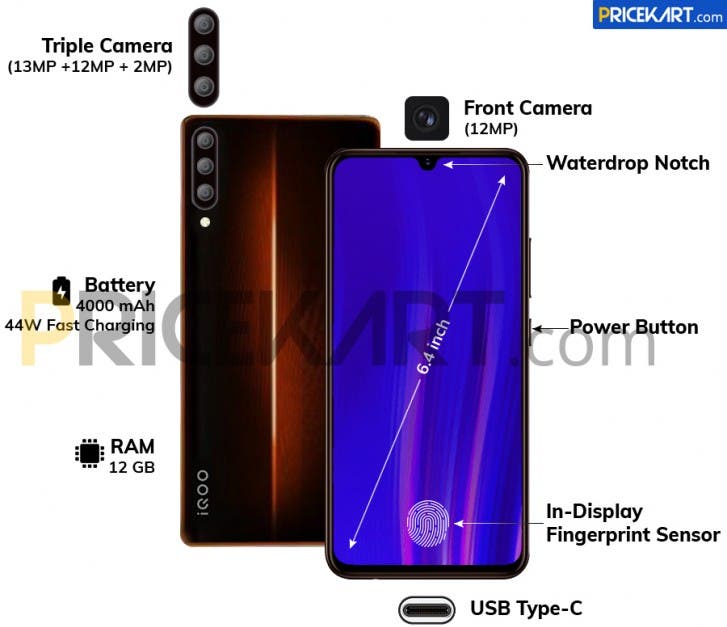 The phone in the labeled graphic seems very similar to the one shown in the leaked video. It describes nearly everything that is featured by the smartphone. The iQOO smartphone will feature a 6.4-inch Display with In-Display fingerprint scanner. The selfie snapper will produce pictures with up to 12MP of resolution. The Triple rear setup is composed by a 13MP main sensor paired with 12MP secondary sensor plus a third sensor with 2MP. The leaked picture lists the 12GB RAM variant of the phone, that is fueled by a large 4,000mAh battery that supports 44W fast charging over a USB Type-C port.

The smartphone is set to be announced by Vivo on March 1 in Shenzhen, China. The package of premium specifications is completed by the presence of a Snapdragon 855 and the fast charging system promises to charge the phone in just 47 minutes. Since March 1 is nearing the shores, we will not need to wait so much to know all the details of this premium smartphone.