Earlier today, the founder, chairman, and CEO of Xiaomi Group, Lei Jun, said that Xiaomi has added BYD factory to boost the production capacity of the Xiaomi Mi 9 which has so far been handled by Foxconn. Zhang Feng, vice president of Xiaomi’s supply chain, revealed that the first batch of Xiaomi Mi 9 produced by BYD was officially launched ahead of schedule. At present, BYD’s production capacity is gradually increasing, he said. He added that in mid-to-late March, a large number of BYD-produced Mi 9 will be shipped. 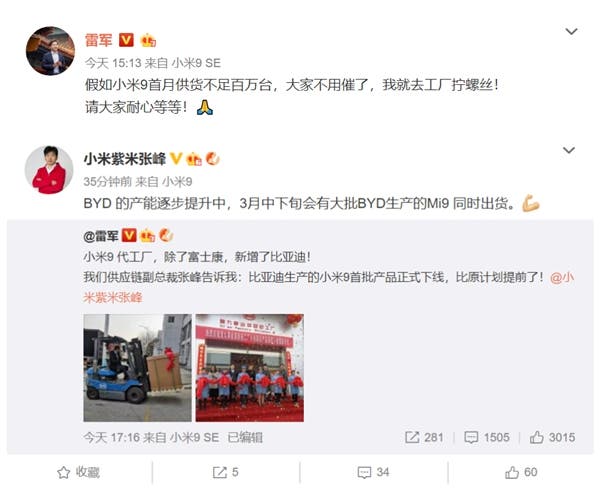 Lei Jun also said that if Xiaomi fails to make a million units of the Xiaomi Mi 9 available in its first month, he will personally go to the factory and join in the production process. He begged Mi fans to be a bit patient. The Xiaomi Mi 9 had a tough start after it was barely available for purchase. The first official sales lasted for only 53 seconds and this irritated a lot of Mi fans. Since then, Xiaomi has shown efforts to make this smartphone available by activating two-weekend sales which did not make much impact. The next round of sale for the Xiaomi Mi 9 is at 10:00 am on March 5, and the starting price remains 2,999 yuan ($447) for the 6GB+128GB version.