Though not a device that will pique the interest of many like the recently announced LG G8 ThinQ, the Korean electronics giant LG might in the coming days/weeks drop the sequel to last year’s low-end X4+, though maybe restricted to its Homeland.

An unannounced LG phone dubbed the LG X4 (2019) has been caught listed on Google’s Android Enterprise website. While the listing does not offer us a glimpse of what the device might look light, it does give a brief rundown of its basic specs. What is perhaps the most intriguing thing about the device is that it will boot Android Oreo out of the box when launch. Googles latest OS -Android 9 Pie has been out for some months now, so it is surprising a device – flagship or entry-level billed for release at about this time is still stuck with Oreo. Well, that’s is the OS the LG X4 (2019) will bot out of the box, maybe LG will push out Android Pie soon after the device hits the store. 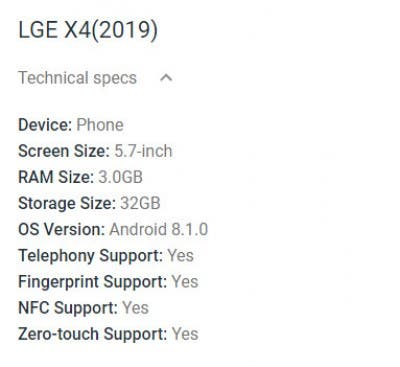 Through the listing, we are made to know that the device will flaunt a 5.7-inch display, 3GB of RAM, 32GB of internal storage, and supports NFC.  Under the hood, the device is expected to come with a slight upgrade over last years Snapdragon 425 built on the 28nm node, so at least a Snapdragon 450 would be greatly appreciated.