Following up on the Realme 2 that was announced last year, OPPO’s Realme at an event today in India unveiled the Flipkart exclusive Realme 3. The Realme 3 Pro with some more advanced specs was earlier rumored to launch alongside the device today, that, however, didn’t pan out.

To satisfy the expectation of its teaming fans, Madhav Sheth, CEO of Realme India at the end of the event confirmed that its company also plans to launch the pro variant of the device later this year. Tipped to be called the Realme 3 Pro, the  CEO hinted that the device will land much later in April, perhaps as the company response to the Redmi Note 7 Pro in India. While he did not reveal any significant details about the upcoming device, Madhav Sheth, however, hinted that the device will see some improvements in both the processing and photographic department. 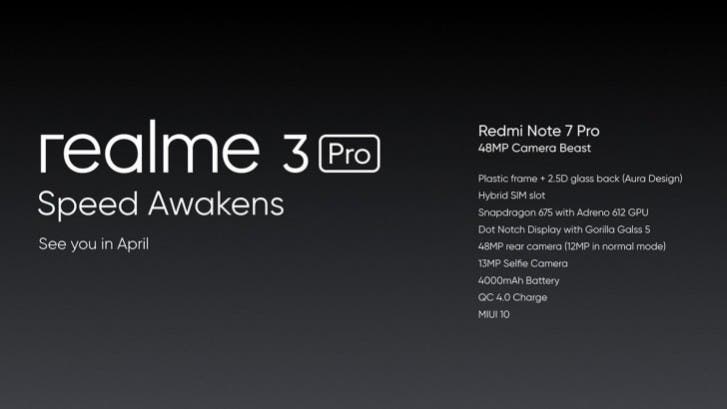 Given that the Realme 3 Pro will be pitted against the Redmi Note 7 Pro, we expect the device to pack some specs and features similar to the Redmi device. First, it is expected to completely drop MediaTek SoC for the Snapdragon 670/675, while the dual rear camera might make a return, but might ditch the main sensor for a 48 MP camera sensor.

With the month of April still a few weeks away, there’s still plenty of time on the clock for leaks, so we expect to see some leaked details soon.