On February 20, VIVO officially launched the new VIVO V15 Pro pseudo-flagship. Undoubtedly, its biggest selling point is the frame-less display as well as the pop-up front camera. Both make the phone’s screen ratio quite high. Therefore, it’s capable of providing an outstanding visual effect. However, it’s not so eye-catching in terms of hardware. But this also helps the phone cost affordable. Initially, it was launched in the Indian market. Today, it became known that the next destination for this amazing smartphone is Thailand.

The VIVO V15 Pro sports a 6.23-inch Super AMOLED display and a pop-up front-facing camera design, which makes the handset achieve 91.64% of screen ratio. At the same time, the display resolution reached the Full HD+ level. Moreover, it’s packed with the 5th generation screen fingerprint recognition module, which is quite fast and accurate.

In terms of hardware, the VIVO V15 Pro is equipped with the Snapdragon 675, which is paired with a 6GB or 8GB of memory. However, the 8GB RAM version is limited to specific markets. The storage space can be up to 128GB, but it can be expanded via a microSD card. The NFC support is also limited to specific markets such as Singapore, Hong Kong, Russia, and Taiwan. There is also a 3,700mAh battery that supports the fast charging standard.

Like many other VIVO phones, the VIVO V15 Pro uses a gradient color on the back, which changes between dark blue and light blue. The phone is also available in red. But again, this is going to be available in certain markets only. 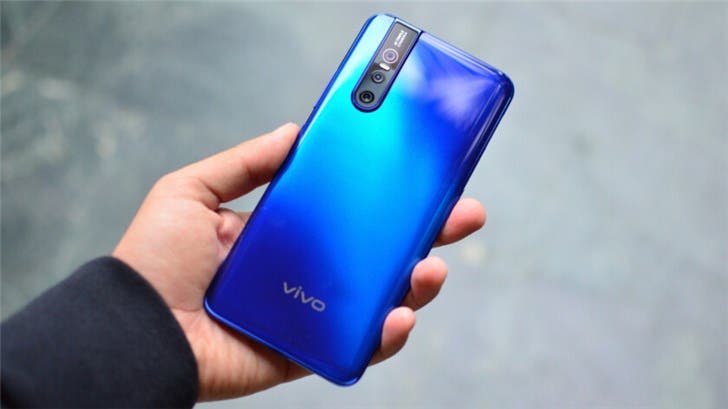 The camera is another big selling point of the VIVO V15 Pro. Our protagonist features a triple-camera on the rear, which consists of a 48-megapixel Sony sensor, an 8-megapixel ultra-wide-angle lens, and a 5-megapixel depth sensor. The front camera uses a 32MP sensor.