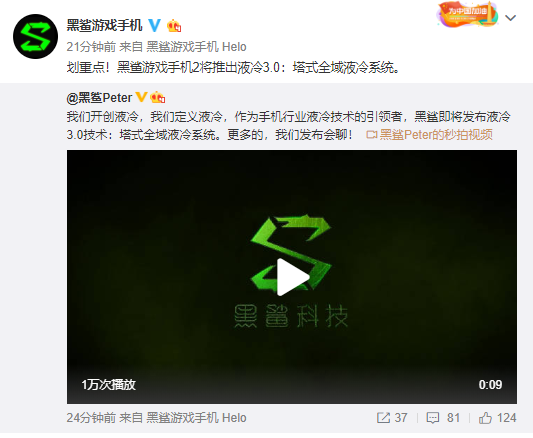 Recently, we’ve seen many smartphones sporting the Qualcomm’s latest Snapdragon 855 flagship chip. It’s assumed the upcoming Black Shark 2 gaming smartphone will be powered by this processor as well. But it’s not going to be the biggest selling point of this handset. Instead, it’s going to sport a new generation of liquid cooling 3.0 technology, which is dubbed the tower-type global liquid cooling system

In terms of hardware configuration, the Black Shark 2 gaming smartphone is said to come with a 12GB+256GB large storage combination. Due to the Snapdragon 855, the new cooling technology, and the storage combination mentioned above, the phone will be capable to provide the improved game performance.

Previously, a device called blackshark skywalker was leaked in the GeekBench database. The data shows that its single-core score is 3494 points, while the multi-core score is 11,149. So there is every reason to think this is the Snapdragon 855 SoC.

Other rumored specs include Android 9 out of the box, 27W fast charging option, triple-camera, and so on.